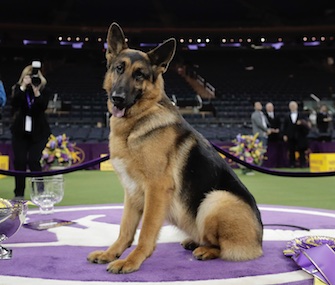 Rumor finally has it all. The 5-year-old German Shepherd who’s named after Adele’s “Rumor Has It” was favored to win Westminster’s Best in Show title last year, but she lost in an upset. But in January, she came out of retirement when her handler, Kent Boyles, decided to give her one more shot. Rumor snagged the prestigious award last night at 141st Westminster Kennel Club Dog Show at Madison Square Garden, after taking long strides through the ring. She’s only the second German Shepherd to win the top prize in the show’s history. The excited dog leapt up to lick Boyles after her win. “The German Shepherd standard talks about quality and nobility,” said Thomas Bradley, who was the Best in Show judge. “She is just magnificent.” Rumor bested a Norwegian Elkhound named Duffy; a Pekingese named Chuckie; a Miniature Poodle named Aftin; a Norwich Terrier named Tanner; a Boxer named Devlin; and an Irish Setter named Adrian. Now Rumor will really retire. “She's going to be relaxing for a while,” Boyles said after the win, and there are “puppies in her future.” — Read it from the AP via Yahoo