Home ›
Our Pet Experts ›
Linda Lombardi ›
Save the Manatees: Speak Up Before It's Too Late

Save the Manatees: Speak Up Before It's Too Late 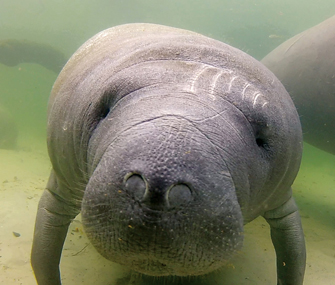 Photo © Patrick M. Rose, Save the Manatee Club
This manatee has scars around one of his eyes, likely from a run-in with a boat.

Manatees are in trouble. The gentle, vegetarian marine mammals are at long-term risk from habitat loss, injuries from boat propellers and a host of other factors. But right now, they're facing a more immediate danger: losing their status as an endangered species.

In 2012, the U.S. Fish and Wildlife Service (USFWS) was petitioned to consider changing the manatee's status from endangered to merely threatened. This past July, USFWS announced that it was moving forward on a status review that would consider whether to implement this change, called downlisting.

As part of the review process, USFWS accepts public comments, but only for a limited time. The comment period ends September 2, and Patrick Rose would like you to weigh in.

Why Manatees Are Still in Danger

Rose is executive director of Save the Manatee Club, which has been working to conserve the species since 1981. He says that when downlisting was last considered in 2007, there were signs of improvement, but the situation has gone downhill since."Within the last five years, three of those years had record mortality, two of which were exceptionally high record mortality," he says.

Manatees are facing loss of habitat, which is expected to accelerate. To survive the winter, they need warm water sources, which include both natural springs and the outflow from power plants. Even with the current sources of warm water, they've been suffering from the cold. In 2010, 766 manatees died in the United States, more than 300 because of cold stress. And this kind of habitat, which has not been protected for the future, is shrinking.

"Spring flows are reducing. They're becoming polluted, and over time, with the pressure of pumping from the aquifer and climate change, we're going to be seeing that situation getting worse," Rose says.

Manatees are also affected by declining water quality in a variety of ways. A record red tide killed 276 manatees in southwestern Florida in 2013. "Red tides are becoming more frequent and more virulent," he says. "And recent science seems to indicate not that they form because of pollution, but that [pollution]ismaking them last longer and have a greater impact." The manatee's food sources are also affected by pollution.

Why "Threatened" Is Not Good Enough

Since "threatened" would mean manatees are still protected, then you may wonder about the impact of the status change. Rose says there are specific legal differences, some of which stem from the fact thatmanateesare marine mammals, so they are also protected by the Marine Mammal Protection Act."They have specific protections as the result of being both a marine mammal and an endangered species that they would lose as a threatened marine mammal," he says.