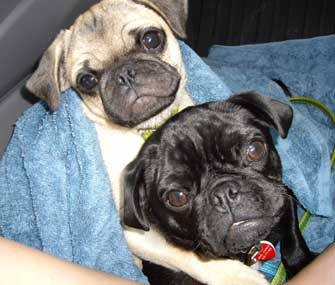 Credit: Mikkel Becker
From the time they were puppies until the day Bruce (top) died, the Pugs were inseparable.

Bruce’s spirit was fully alive to the very end, but as the days wore on, his body wasn’t able to keep up. When it was time to say goodbye, I loaded Reagan and the Pugs into the car and drove from our home in Seattle to Almost Heaven Ranch, my parent’s home in Idaho. I wanted to give Bruce one last day doing his favorite things in a place that was the closest to doggy heaven he’d ever known.

Bruce had one last exceptional day at Almost Heaven Ranch, doing the things he’d loved since puppyhood: visiting the barn cats and horses, chasing a ball (much more slowly than formerly but with the same dedicated bravado) and joining in a group howl with all the other ranch dogs, adding his oh-so-sweet Pug warble to the cacophony. Like a king, he was treated to feasts of food that went beyond anything his food-crazed Pug heart could dream up.

At the day’s close, Bruce and Willy cuddled close to one another, lying side by side on my training coat. Bruce’s breathing was becoming more and more labored, and we knew the end was near. The mood at Almost Heaven was somber; all seven of our family dogs seemed to sense what was coming.

I knew Bruce would need Willy there for support at the end, but I also felt that it was important for Willy to be present when Bruce passed away. I was certain that he would find closure in knowing what had happened to his buddy.

Dr. Roland Hall, a veterinarian and a dear family friend, was able to come to the ranch to give Bruce the final grace. (My dad, Dr. Marty Becker, was unfortunately traveling and unable to get home.) When he arrived, Dr. Hall reassured me that I had made the right choice to have Willy present. He told me that he had known many dogs who anxiously wandered their homes for weeks after another pet’s death, uncertain of their companions’ whereabouts.

Reagan held Willy in her arms as we said our goodbyes to Bruce. She told Bruce how much she loved him and held onto his fur with her little hands to pet him in the way he had always loved for her to do. I rested my head on the floor next to Bruce, with his head nestled in my hand, and told him that I understood his body was so tired and that it was OK for him to let go. We thanked him for the love he had given us. I told him to run wild and free with his doggy friends in heaven, knowing every time he looked down on us, we would be thinking of him and that our love for him would continue to grow after he was gone. I told him I couldn’t wait until the day when he would race to greet us at heaven’s gates, because heaven would only be heaven with him there.

Dr. Hall gave Bruce a sedative, and in less than two minutes, he fell into a deep sleep. Willy hid behind me when the last injection was given; he seemed to understand what was happening to his friend. With Bruce’s head lying gently in my hand, I felt his final breath pass through his body and knew his spirit had left us.

As difficult as it was, I knew I needed to ensure that Willy understood that Bruce was gone and that everything was OK. I took Willy in my lap as I sat next to Bruce’s body; rather than trying to get closer to Bruce, as he had always done in the past, Willy took a sniff or two and turned away. Willy’s actions mirrored my own feelings — it was difficult for me to view Bruce’s body, because seeing him there without his spirit inside felt so wrong. As Dr. Hall lifted Bruce, Willy sniffed him one last time and then swiveled his head away, burying his face in my hair as I held him.