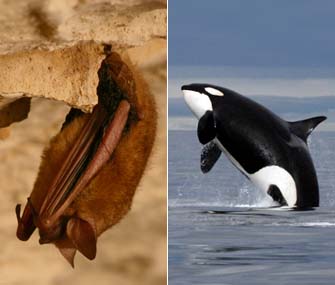 What do whales and bats have in common? It sounds like the start of a corny joke, but the answer is more than you think. According to Danish researchers, the two animal species have an eerily similar hunting technique.

Although it’s widely known that both bats and toothed whales — as well as dolphins and porpoises — emit a type of sonar called echolocation to detect prey, the Danish study found that both species increase their rates of calls per second to about 500 clicks. Bats do this while in pursuit of prey, and whales exhibit the behavior when they're going in for the kill.

The finding surprised scientists because it had been previously thought that the two species’ echolocation techniques would have evolved in drastically different ways over the course of millions of years because of their size differences and disparaging habitats.

The conclusion: Apparently not. Researchers hypothesize that the similarities may be because of the auditory processing limitations of the mammalian brain.