Should Gray Wolves Be Removed From Endangered Species List? 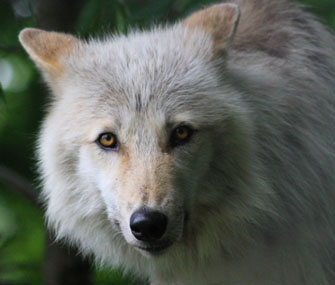 Photo by Maggie Howell
Alawa is one of the wolves at the Wolf Conservation Center. She is a Canadian/Rocky Mountain gray wolf. According to the center's website, there are more than 1,600 of these wolves in the northern Rockies. In 1995 and 1996, they were reintroduced to Yellowstone National Park and central Idaho.

An animal’s removal from the endangered species list should be a cause for celebration and a sign that the species no longer requires help from the federal government. When this happened with the bald eagle, conservationists and lawmakers alike were thrilled. Unfortunately, a proposal from the U.S. Fish and Wildlife Service to remove the gray wolf from the endangered list is being greeted with dismay, not delight. If the proposal passes, protections for wolves will be removed in the lower 48 states, with the exception of the Mexican wolf subspecies. The FWS praised the wolf as a recovery success story, but its proposal has been met with criticism from many in the scientific and wildlife communities. This criticism has increased since the independent scientific peer review of the proposal was suspended after the service asked for the removal of three scientists; it turns out the three, whose identities were supposed to remain anonymous, once signed a letter objecting to the plan.

The FWS would not comment on either that request or the proposal itself, but Suzanne Stone, northern Rockies representative and western wolf conservationist for Defenders of Wildlife, is not surprised by how hard the Fish and Wildlife Service is working to delist gray wolves.

“Unfortunately, the service has been doing pretty much everything it can for close to a decade to absolve itself of responsibilities for wolves since it’s been a controversial issue," Stone says. "It can be a headache and a P.R. problem to have to work at restoring wolves. They clearly want to get rid of their responsibility to the wolf issue as quickly as possible.”

Conflict Between Wolves and Humans

Stone has been working on wolf conservation for almost 25 years, concentrating on managing conflicts between wolves and humans. She has spent a lot of time working with ranchers to develop strategies to help them live in harmony with the wolves, such as using nonlethal deterrents to stop wolf predation of livestock.

“I try to help build acceptance and tolerance toward wolves and lessen the impact wolves are having on the ranching community,” she says.

Pressure from communities that clash with wolves, like ranchers, may be a big factor motivating the service to remove wolf protections. Stone says the FWS is missing a great opportunity to demonstrate leadership in resolving such conflicts.