Home ›
Our Pet Experts ›
Dr. Patty Khuly ›
Snakes Alive! Why Some of Us Will Never Be Snake-Worthy

Snakes Alive! Why Some of Us Will Never Be Snake-Worthy 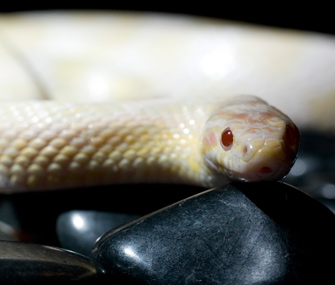 Ever had a pet snake? I have. Years ago, I adopted one after an employee learned she couldn’t keep her. Thinking my then-6-year-old would enjoy handling a snake while learning about its distinctly reptilian qualities, I caved to the serpent’s mystique.

Dart was not an especially timid or gentle snake — a fact that less starry-eyed novice snake owners would have guessed, given that she was named after her belligerent way of striking human hands. But she was small (just about 18 inches long) and a corn snake (widely regarded as a “friendly” species), so I looked past it all.

Then there was the feeding thing to contend with. No problem, I rationalized. I’m a veterinarian, after all! And I had plenty of past experience feeding wild birds of prey in a rehab facility. How different could this be?

Based on the title, I’m pretty sure you can guess where this post is going. And it’s true; I couldn’t have been more misguided in my line of thinking.

While I did make some headway managing her aggressive impulses, she was never too wild about hanging with anyone but me. Moreover, my son was allergic to something about her bedding or her prey, which contributed to the kibosh on the enriching and educational aspects of the reptile-as-pet thing.

Back to the feeding thing: The fact that snakes like Dart consume whole prey is a common husbandry concern plenty of snake owners find they have no stomach for — particularly as snakes get bigger and their prey starts looking more like the Easter Bunny than an amorphous near-fetal rodent.

Yet the actual feeding of the mice (in Dart’s case) was in no way the biggest stumbling block. Luckily, I was able to adapt Dart to eating pre-killed and thawed mice after a short period of feeding live and a transition period of freshly killed (still warm). So you understand, I prefer that captive snakes be trained to tolerate dead prey so they don't end up in traumatic altercations with them. (A bite from a mouse can become terribly infected.)

As you can probably tell from my willingness to handle and kill all brands of prey, it wasn’t squeamishness that got in the way. Rather, it had more to do with the fact that the creatures were purpose-bred to be consumed by an animal I had no good excuse to be keeping in captivity anyway. After all, Dart was not like the wildlife species we rehab and return to the wild.