Home ›
Our Pet Experts ›
Nora Zelevansky ›
Stay With Me: A New Young Adult Novel Explores Love in the Time of Pit Bulls

Stay With Me: A New Young Adult Novel Explores Love in the Time of Pit Bulls 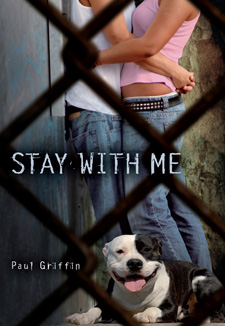 In his new book, Stay With Me, Griffin draws on real-life experiences as a dog trainer and a mentor for at-risk kids to weave an untraditional love story between two peopleand the dog who brings them together.

We asked the author to share what fuels his creative process — and his fascination with the much-maligned breed.

Q. What inspired your interest in illustrated books and dogs?

A. Paul Griffin: When I was a kid, my grandfather had an 8-millimeter movie camera and I was his assistant. The way he edited with scissors was amazing — it was like a crash course in storytelling, and I developed an appreciation for how a story can change. I also drew my own comics, and since my father was an English teacher, he hooked me up with Ralph Ellison’s Invisible Man, which is when I started reading all the time.

My other grandfather was a firefighter. To make extra money, he bred and trained German Shepherds. (This was before we knew that backyard breeding was not a great thing.) He was the one who taught me how to be with dogs — never yell at an animal but show tough love. After that, I was never intimidated by big dogs.

Q. Why did you decide to write about a pit bull in Stay With Me?

A. About 15 years ago, everyone wanted a Pit Bull because they were tough dogs. Ultimately, they got abused and labeled as fighting dogs instead of family dogs. They’re terriers, so they love to run — you definitely have to give them something to do and train them or they’ll get into trouble because they’re goofy and love to get into everything. But I’ve found them to be the most loving, most amazing dogs with kids.

Q. Based on your experiences, how can dogs help at-risk kids better their lives? 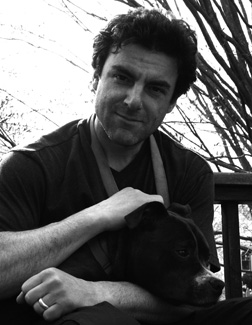 Author Paul Griffin with his breed of choice.

A. I teach folks who've recently adopted Pit Bulls about the basics behind commanding authority. I also participate in an HIV prevention program and interactive conflict resolution workshops with kids who've either been jailed or are at risk of incarceration through an amazing organization, Creative Arts Team. Whenever I can get the dogs in with the kids, I do. If I can’t bring them into a school, I’ll Skype the dogs in or have the students write stories about dogs — they're the greatest bridge for connecting people and getting them to open up.

Q. In Stay With Me, a rescued dog helps build a connection between two people. How did you go about inventing a canine character?

A. The characters are all based on my own dogs. A lot of them have come and gone — and they’re pretty hard to forget. Their personalities are as unique as our own. I actually just lost a dog, but I can’t be too sad because he was 19 years old. I always try to keep three dogs at a time because that’s a nice number for a pack, so I'll probably adopt another one in February.

Q. What are some of your favorite animal-focused books?

A. Marley & Me, The Art of Racing in the Rain and Travels With Charley, the latter of which is a really beautiful nonfiction book by John Steinbeck. In a lot of ways, the dog — the one stable thing in his life — leads him across America. The Poodle is a rock all the time, no matter what the circumstances.