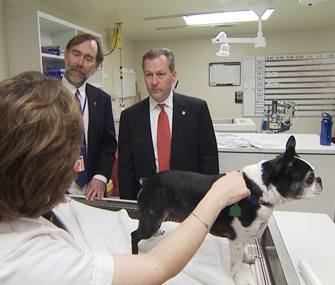 In my mind, this initiative is a positive step forward because money for cancer research is sorely needed, and the program expands on one of the most important ideas in veterinary medicine: the One Health Concept, which uses spontaneously occurring diseases in pets as models for the study of human disease.

As a veterinary oncologist who can extend the life of beloved pets — but only sometimes cure them of cancer — I believe this money will help improve the quality and quantity of life for our companion animals. If the same money leads to new treatments for humans with cancer, then the dog continues to be man’s best friend.

As appropriated, the million dollars will be allocated by a strategic planning committee and will be awarded, in part, as seed grants. A seed grant helps an investigator generate preliminary data to create a proposal. Investigators then compete to submit the best proposal to an outside funding agency in order to receive an even larger grant.

The Auburn University College of Veterinary Medicine also unveiled the Mike Hubbard Fund to support graduate-level training in cancer research, which has been identified as a critical need within the veterinary profession. Auburn gets two paws up for helping to meet this need.

Why Dogs Are a Good Research Bet

Veterinarians have long embraced the One Health Concept, which views human and animal health as a single field in which discoveries geared toward one species advance health in both species.

“The street goes both ways with regards to research," says Dr. Bruce Smith, director of the AURIC. "Some studies in humans help animals, and some studies in animals help humans.”

Several facts make the dog especially important to cancer researchers. Estimates suggest that 4 million dogs get cancer every year — and many of them suffer from the same diseases that we do, including lymphoma, melanoma and breast cancer. Scientists have cloned the canine genome, and studies have already been published linking certain genetic abnormalities that lead to cancer in dogs — abnormalities that happen to be very similar to ones that cause cancer in humans.

The fact that dogs have shorter lifespans is a particular boon to cancer researchers because it means that outcomes are known sooner — and new information on cancer treatments becomes available faster compared with studies done on humans, who may live five to seven times longer.

To put a veterinary perspective on how much cancer research costs, I contacted the Morris Animal Foundation (MAF), which launched the Canine Cancer Campaign in 2007 to prevent, treat and ultimately cure the disease in dogs. The campaign now funds 41 cancer-related studies in dogs and cats. The aggregate financial commitment by the MAF: $6.4 million to support studies that focus on new technologies and genetics.

The bottom line: Cancer research costs big dollars, and while those suffering from cancer owe the Alabama Legislature a big thank you for admirably appropriating a million dollars to a worthy cause, it will take more — much more — to tackle the problem of cancer in pets and people.

How You Can Help the Cause

If your oncologist suggests that your pet could qualify for a clinical trial, consider it. Your pet will be contributing to the scientific process, potentially leading to a breakthrough in treatment. If you can, please support cancer research, especially now that you know both animals and humans will benefit.

Dr. Ann Hohenhaus, a practicing veterinarian for 25 years, is board-certified in both oncology and internal medicine. She maintains her clinical practice at The Animal Medical Center in New York City, providing primary care to her long-term patients and specialty care to pets with cancer and blood disorders.