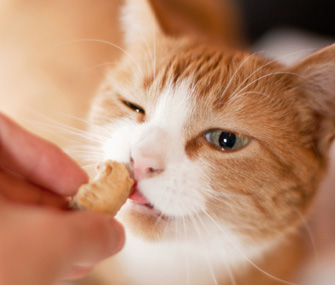 Thinkstock
Even veterinary professionals give their cats people food sometimes. Our newest survey digs into the most and least allowed treats.

Cats might not be known to beg as much as their canine counterparts, but that doesn't mean they never snag a special "people food" treat from their owners. And why not? Some human foods are actually good for our kitties. (Just make sure you've got the all clear from your vet that the snack you're offering isn't unsafe for cats.)

Veterinary professionals also occasionally share their food with their cats. In a recent Vetstreet survey, 153 cat-owning veterinary professionals(including veterinarians, vettechs and office managers) revealed which foods they let their cats eat. They chose from 22 foods in five categories: Fruits, Veggies, Meats, Dairy/Other Protein and Junk Food. See how their answers compare to yours below!


There were two foods that received far more votes than any others on the list, with 55 percent of respondents saying they let their cats eat chicken, and 50 percent saying fish/seafood is allowed. After that, the numbers fell somewhat dramatically. Interestingly, milk—often considered a common treat for cats—didn't even make the top five(although there's a good reason for that). And are we the only ones surprised by the fact that fish/seafood wasn't No. 1? Tuna, anyone?

We didn't ask for clarification on why these veterinary professionals allowed their cats to eat some foods more than others, so there are many possible explanations for why, say, chicken ranked higher than beef. It could be that the respondents themselves were more likely to eat chicken and, therefore, share it with their cats, or maybe it's because it's easy to prepare chicken in a way that's fairly bland and safe for cats.

How the Categories Stack Up

Given that the top five foods were from just two categories, it's not surprising that those two categories ranked the highest overall. To determine the category rank,we averaged the "yes" percentages of all the foods in each category. No. 1 was Meats (chicken, beef, pork, fish/seafood) with a 37 percent "yes" average. Dairy/Other Protein (cheese, peanut butter, eggs, yogurt, milk) had the next highest percentage with 20 percent.

However, there were some surprises to be had! Junk Food (chips, pizza, ice cream, cookies) had a 10 percent "yes" average, which was more than Veggies (carrots, green beans, sweet potato, broccoli) with 5 percent or Fruits (apples, bananas, berries, melon) with just 4 percent.

Ten of the 11 least commonly allowed foods all came from the bottom three categories: Fruits, Veggies and Junk Food.

We also asked veterinary professionals about what human foods they fed their dogs. The food lists we offered were not identical: Dogs had five extra foods on theirs (zucchini, French fries, peas, oranges and nuts), and cats were the only ones with milk and melon on their list. But the remaining options were the same for both. A few foods were popular among both species: Chicken, cheese and beef made the top seven for cats and dogs. But there were some notable exceptions: Fish/seafood ranked No. 2 for cats but No. 19 (almost at the bottom) for dogs. Peanut butter, which came in at an impressive No. 4 for canines, didn't fare so well with the felines — it ranked in the bottom half of the chart at No. 12.

Do you feed your cat any of the foods on this list? Let us know in the comments below.