Teach a New Pet His Name 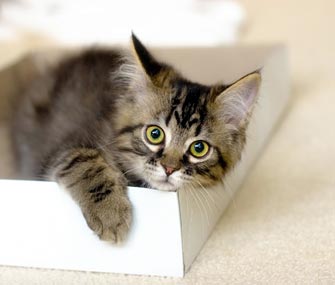 Teaching a pet to respond to his name begins by first crowning your furry friend with a fitting title. Recently we brought home a three-legged shelter cat and we sifted through dozens of names over a couple days. We finally landed on Nemo, named after the fish in my daughter’s favorite movie, Finding Nemo. Nemo also faced physical difficulty, with a crippled fin, but he had a strong spirit to overcome challenges. Often naming a four-legged addition to the family isn’t much easier than naming a child, largely because pets are becoming more a part of the family, which is reflected in the national trend of pet names veering away from the traditional Spot or Rover and toward more humanized ones like Max, Bella and Molly.

Kittens and puppies aren’t the only candidates for new names; shelter pets or animals being transferred from their original homes may also benefit from new names. A freshly given name can emphasize a new start and might help a pet with negative associations he may have with his past name and home.

Once you’ve decided on a name, it’s time to teach your pet to distinguish his name from other words. Most pet parents want their pets to look at them when their names are called. Usually a name is used to get the pet’s attention, and then you tell him what to do next, such as “Nemo, here, kitty, kitty” or “Nemo, dinner.”

In order for a pet to pay attention to his name, it needs to be significant to him. Try saying his name followed with something he enjoys, like petting, treats, going outside, play or a meal.

To teach Nemo his new name, I said "Nemo" and then placed a treat on the ground where I was standing. This taught him to orient his body toward me whenever I called his name. Petting was also used as a reward by first calling his name. As soon as he looked toward me, I directed him by saying “Here, kitty, kitty,” and using playful hand gestures to lure him next to me to be petted. We also used his name to get his attention to invite him onto the bed during my daughter’s bedtime story, an activity he also enjoys.

It’s important to say your pet's name only one time so that he doesn’t dismiss it as insignificant babble, which can happen if you repeat the name over and over. If he doesn't give you his attention right away, follow the name with other attention-getting noises, like leg slapping or high-pitched sounds, and reward him when he turns to you.

When you're speaking to multiple pets at the same time, you can also come up with a general term for more than one pet. When I’m addressing both of my Pugs, rather than saying their individual names, I use “boys.” "Hey, boys, want to go outside?"

Although scolding and lecturing your pet is not recommended, if you simply can’t help yourself, use a formal name for your pet so that his normal name doesn’t become associated with something negative, similar to the way a mother might use her child’s formal name when she is upset, substituting “Lexington William” for the regularly used "Lex."

With practice, your pet should start directing his attention toward you when you say his name, because he will learn that wonderful things happen when you call his name.