Teach Your Cat to High-Five 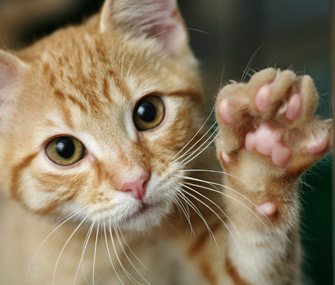 Thinkstock
High-five isn't just a cute trick; it can help your cat become more comfortable with having her paws handled.

Training your cat to give you five serves purposes beyond just showing off your cat’s inner genius. The trick provides a predictable, voluntary way for cats to interact with people that boosts their confidence. Additionally, the trick can build a cat’s cooperation with having her paws handled in situations like veterinary exams and nail trims.


Here is the process I use as a cat trainer to teach felines to give me five. Included are variants you can use as you determine what works best for your particular feline.

Understand the basics of training.

One important factor is having something your cat is willing to work for,such as tasty treats or play,to serve as a reward. Understanding how to use a marker signal, like a clicker or a word like "good" or "yes" that pinpoints the behavior the cat did to earn the reward, is also important. The marker should be used at the exact moment the behavior occurs.

Start with your cat sitting.

Sitting is a preferred position for the high-five; it’s more controlled. But the high-five can be taught in a standing position as well. If a cat doesn’t already know how to sit, training this portion of the trick separately is helpful. However, simply approaching the cat when she's sitting also works. If a cat is lying down — a position this trick is extremely difficult to teach in — use a treat or toy to coax her into a sitting or standing position.

Entice your cat to reach her paw toward your outstretched hand with a toy or treat.

The best method of getting the paw to move toward the hand depends on what works for your individual cat. One way is to hold a treat inside a closed palm. Many cats are curious and will sniff or paw up toward the hand, and a front paw will commonly rise up off the ground during the investigation. For even a slight paw lift, mark with a click or word, and then reward. After your cat enjoys her reward, reset and try again. Ultimately, the goal is for her paw to raise all the way off the ground and touch your hand. To get this, reward your cat as her paw raises gradually become higher. Some felines will immediately move their paws to touch your hand while others start with only minute movements that are then built upon in multiple training sessions.

Another way to get paw movement toward the hand is to use a toy your cat will paw at, like a wand toy. When her paw raises even slightly to paw at the toy, mark and reward. If needed, move the toy around to entice your cat to paw at it. Once your cat understands the pawing motion is what is earning the reward, decrease the toy's movement until it’s still and the paw swipe occurs. When your cat’s reliably pawing the stationary wand toy, start to shorten the length of the toy by either moving a hand down on the wand or winding part of the toy into the hand. If at any point the cat stops pawing as before, the toy may need to be lengthened again or movement once again added. Then, in a more gradual fashion, the toy can be made less noticeable. The goal is for the toy to become so small and short that the paw will touch the hand. At that point, only reward a paw touching the hand.

For both methods, once your cat’s readily touching her paw to your hand, you can take away the toy or treat and simply hold your hand out closed, like there's something in it. When the cat consistently paws the closed hand, then begin to change the position and shape of your hand, so it's in the ultimate hand position you’d use for the high-five. Slowly change the shape of the hand from being closed to opening up by loosening the palm and eventually straightening out the fingers.

The natural cue to ask your cat to high-five will likely end up being an outstretched hand. But to help your cat further distinguish when a high-five is being asked for rather than a hand reaching for something else like petting, consider adding a verbal cue to help clarify the trick. The cue can be whatever you want, but some examples are "high-five" or "put 'er there." To add the cue, practice the high-five and begin to say it as your cat’s paw moves up toward your hand. Then begin to say the word before your cat puts his paw up and just as the hand is stretched out. Ultimately, if adding a verbal cue to the high-five, only reward high-fives when you ask for them.