Teaching My Cat to Love My Husband — Step 3

Vetstreet contributing editor Kristen Seymour's husband, Jared, loves cats. Unfortunately, their cat, Trixie, doesn’t care much for Jared — so they’ve enlisted trainer Mikkel Becker to help them teach Trixie that Jared is actually kind of a catch. This post is the third in a series — you can check out part one here and part two here. And be sure to follow along for the next month as Mikkel and Kristen report back on their progress. 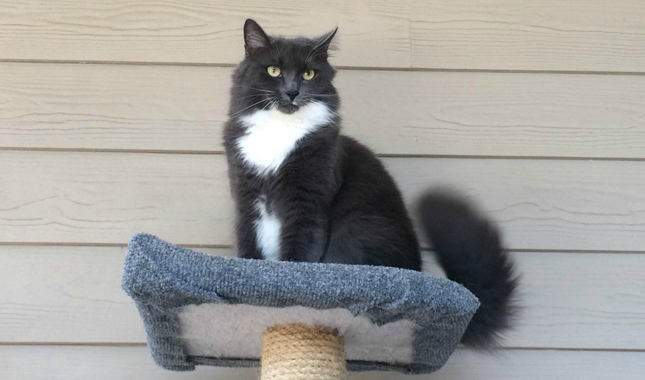 Credit: Kristen Seymour
Trixie feels most comfortable on her perch, so Mikkel suggests that Kristen and Jared make it part of their training.

When Kristen approached me about helping her cat and her husband make friends, I asked her for some basic background information. She told me that Trixie is a rescue cat who came to live with them after spending time in a shelter. Before that, Trixie was essentially feral, which may have a lot to do with her hesitation around people in general and Jared in particular. With this information, plus some other things Kristen told me about Trixie and Jared, I'm working with them to establish some clear goals before they start training.

Based on Kristen’s descriptions of Trixie’s behavior, it sounds to me like Trixie is generally conflicted about people: She wants to be near Jared and Kristen and their friends, but is easily overwhelmed by too much interaction. For instance, Kristen mentions that Trixie is OK with being petted, but only at a time and place of her choosing. Trixie’s hesitance to let even Kristen pet her leads me to think that her reticence has less to do with Jared and more to do with Trixie’s own preferences about touch and proximity.

But according to Kristen, Trixie is not antisocial; she will go up to new people, men and women, and rub herself on them in greeting. For Trixie, rubbing up on new people may help her to feel safe and comfortable around them, if only because she has marked them with her scent. This behavior is actually quite common — a fearful cat will often investigate new people, but will only stay around as long as the interaction continues on the cat’s terms. As soon as there is any effort made to pet or touch the cat, her comfort level decreases and she is likely to flee.

It seems likely that Trixie’s resistance to touch is what is getting in the way of her relationship with Jared. Kristen provided me with a video of Jared hanging out with Trixie. It looks to me as though she wants to interact with him and isn't averse to his presence, but as soon as he reached out to touch her, she scooted away. My guess is that it is the petting she doesn’t like, not Jared himself. Unfortunately, since Jared has been trying to bond with Trixie by petting her, he may have unintentionally created a situation in which Trixie avoids him because petting — particularly having hands reach for and touch her — is scary to her and she is trying to avoid it at all costs.

In addition to avoiding touch or petting, there could be other reasons why Trixie is less comfortable around Jared than she is around Kristen. Kristen mentioned that Jared has a low-level allergy cough; this may be distressing to Trixie, particularly since it is unpredictable. It could also be that Trixie is more cautious around Jared because he’s a man and has a deeper voice and a bigger body. Her reticence could also be related to something that happened before she came to live with Jared and Kristen. It is difficult to pinpoint exactly why she hasn’t warmed up to Jared after all this time, but that doesn’t mean there’s no hope for the two of them to form a bond.