Teaching My Cat to Love My Husband — Step 4

Vetstreet contributing editor Kristen Seymour's husband, Jared, loves cats. Unfortunately, their cat, Trixie, doesn’t care much for Jared — so they’ve enlisted trainer Mikkel Becker to help them teach Trixie that Jared’s actually kind of a catch. This post is the fourth in a series — be sure to check out part one, part two and part three. And stay tuned for part five, where Kristen will report back on Trixie and Jared’s progress! 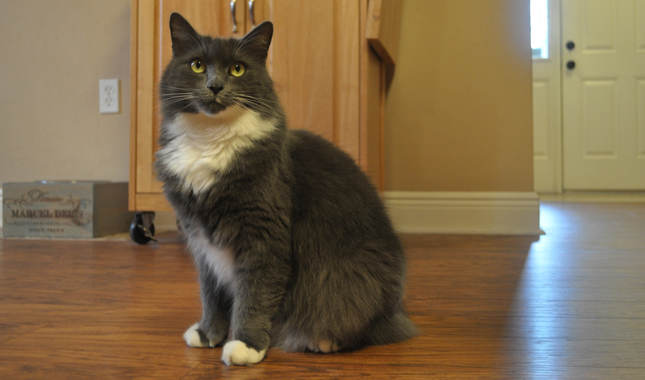 Jared and Kristen have been working to teach their 2-year-old cat, Trixie, to love Jared. Trixie came to them from a shelter; she had been rescued after giving birth to a litter of kittens. Before the shelter, she was almost feral, and she is still hesitant around people in general — and Jared in particular.

But with patience and training, I believe that Trixie can be taught to tolerate (and maybe even like!) Jared. The most important goal for Jared and Kristen as they begin working to change Trixie’s behavior is to turn the things that alarm her into reasons to celebrate.

Kristen and Jared should start by making a list of triggers that upset Trixie. Based on what Kristen has told me and what I saw in the video of Jared and Trixie interacting, I suggested that they start by teaching Trixie to stay calm when people are in close proximity, particularly Jared. They can also work on easing any fears she has of position changes, such as someone moving from standing to sitting or sudden movements, like walking or hands reaching toward her.

The most effective way to address situations that cause fear is to condition the animal to these situations in a way that will not cause her stress and to pair them with something she likes. For example, instead of reaching out and touching Trixie, Jared could slowly move his hand a couple of inches to the side and immediately follow this movement with a reward.

Kristen can also offer rewards when Trixie responds positively to Jared’s presence. For instance, when Jared walks into the room, Kristen should offer Trixie a reward. She should continue to reward Trixie while Jared is in the room — any time he moves, stands or speaks. When he leaves the room, though, Kristen should stop offering treats. This creates an association between Jared’s presence and the treats.

To make it easy to deliver rewards, Kristen and Jared should set up treat stations around the house or have Jared wear a treat bag like those used for training dogs. Either way, they should make sure they have easy access to treats when they are around Trixie.

As Trixie becomes more comfortable with Jared’s presence, he can progress to acting more like his normal self — speaking in a normal tone, moving around at a normal pace, doing whatever it is that he typically does. In addition, Jared should offer Trixie treats randomly through the day — when he walks past her cat tree, for example, or while she’s waiting for him to serve her dinner.