Teaching My Cat to Love My Husband — Step 5

The Benefits of Training

At Mikkel’s recommendation, we also introduced training with a target stick, which our food-motivated feline took to instantly. We used the target stick as well as a clicker and found it provided a really simple (and fun!) way to create positive, predictable interactions between Jared and Trixie. In fact, Trixie even responded to the target stick when she was distracted by things she usually dislikes: During the training period, my parents left their cat, Tebow, with us for a few days. Tebow is probably at the very, very bottom of Trixie’s list of favorite individuals. Like, way below Jared, even. But this time, his visit hardly seemed seem to phase her. Instead, her increased confidence and comfort level was evident as she ignored Tebow and followed the target stick.

Now here’s where things get really interesting: In the midst of all this training, Jared and I (and Trixie and the dogs) moved out of our home and into a new house in a new city. After dealing with the several weeks we spent packing up the only home she’d ever known, Trixie went to stay with my parents (and her nemesis, Tebow) for a week while Jared and I moved into the new house. Given her history, we expected all of this to cause a pretty major setback in her behavior. After all, it was a lot for us to handle, and we’re humans who actually chose to make this move and understood what was happening! How was our scared little kitty going to react to all this change?

I'll be honest: The initial intro was rough — the dogs knocked some very loud items over just as Trixie arrived and she bolted for a hiding spot under a guest bed. We were sure we wouldn't see her for days. But that evening, she was out and about, exploring the entire house. Her body language was totally relaxed and she was rubbing up on everything she could find. She clearly felt comfortable in our new home from the very first day. 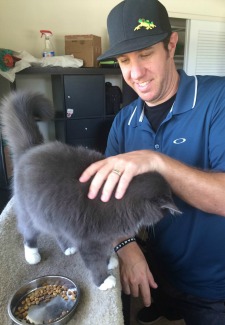 Credit: Kristen Seymour
As you can see, we're still very much in the process of moving in and getting settled, but Trixie has already made herself right at home.

Trixie is adjusting well to the new house; she is calm and curious, and she seems extremely confident. On our first night in the house, she spent an hour or two with Jared and me as we slept, and she has actively been seeking affection from both of us. In fact, when I sat down to work this morning, she hung out in my lap for a minute, although as soon as she realized that I was going to be too busy typing to pet her, she decided to take her affections elsewhere and went off to give our dog, Rudi, a bath.

While we haven't quite convinced Trixie to curl up on Jared’s lap while we catch up on episodes of "Castle," we are seeing real improvement in her interactions with him. It’s great for us, of course — Jared and I love having the chance to cuddle her a bit — but we’re far more excited about the changes we’re seeing in her, both when she’s spending time with us and when she’s just going about her business and exploring her world.

I never would have guessed that just a few fairly simple changes in our behavior (and a lot of treats) could do so much to bring out this self-assured, poised side of Trixie’s personality. And after coming so far in just a few short weeks, I think we may be ready for a new challenge soon. I wonder if she’d enjoy walking on a leash...