But Vetstreet wanted to know more about Teddy — and that voice you always hear in his videos. It turns out that it belongs to Allison Blankenship, owner of Zooniversity, a traveling teaching zoo in Texas. She dishes about the 9-year-old porcupine — and how he became an Internet sensation.

Q. Have you always worked with animals? Can you tell us about your work at Zooniversity?

A. Allison Blankenship:“I grew up wanting to work with animals, but girls in my generation were taught that only a corporate life could be called 'success.' So I became a Fortune 50 corporate executive and developed training programs for executives, physicians andpilots during a long 20-plus-yearcorporate career.

I then made a rather dramatic midlife career switch to follow my heart — I wanted to teach the public about the critical conservation issues facing our planet, using rescued exotic animals as teachers. In 2001, with a giant leap of faith, I founded Zooniversity. That first year we had nine rescued exotic animals, andwe taught 26 programs. Today, we have more than 100 exotic 'teachers,' and we deliver 700 conservation-based wildlife shows each year to schools, libraries, churches and private events throughout Texas.” 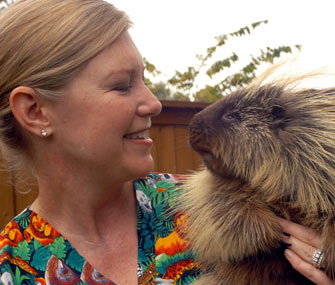 A.“We have long days here at Zooniversity. Today, we were up at 4 A.M., loading some of our animal teachers into travel carriers to make an hour-long trip to a rural school in Central Texas. We also give special intensive care to new rescues. This week, it's four Virginia opossums whose mother was hit by a car. Last week, it was a blind, anorexic gecko whose 10-year-old ownerwas misinformed on gecko care.We've also nursed joey wallabies, prairie dog pups and unwanted exotic pets. In between, we deal with the daily unglamorous responsibilities of running a business. We always do a postmidnight check on the animals before we call it a day. Days off? Rarely. Vacations? Unheard of.”

Q. And what’s an average day like for Teddy Bear?

A.“Teddy Bear only teaches at our large, stage-style events, and his schedule is monitored so that he has rest days between shows. Although he istechnically nocturnal, Teddy will spend parts of the day awake, investigating his enclosure, visiting with his keepers and (of course) eating. He loves to climb, naps perched in his tree and investigates visitors. When teaching, he nibbles on slices of sweet potato while 'talking' into the microphone. He is not frightened by laughter or applause, and seems to consider the travel and destinations as interesting enrichment.”