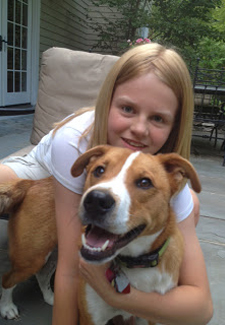 Some teenagers may dream of helping animals when they grow up, but how many take their passion and start their own nonprofit animal rescue? That's what Connecticut teen Claire Fraise did. The 13-year-old started a nonprofit organization called Lucky Tails Animal Rescue. The eighth-grader was inspired to start Lucky Tails after adopting her first dog, Tuggles, whom she found on Petfinder.com and adopted through a rescue. Tuggles had a rough start, roaming the streets as a puppy, at which time he was hit by a car, causing an injury that required a plate and screws inserted in one of his legs.

Soon after Fraise adopted Tuggles she realized something was wrong when he began favoring a leg. After taking him to a vet, she discovered that the previous surgery was not done properly.

“Of course, we got it all fixed, and he's now living happily," Fraise says, but the research she'd done prior to adopting Tuggles and the experience she had with him after bringing him home made it clear to her that she wanted to do more to help other dogs like Tuggles. "Researching rescue dogs and adopting a homeless dog ... made me realize how many dogs need homes and just how many are going to be killed," Fraise explains.

Fraise began research for Lucky Tails in June as part of a home-schooling program started by her mother. In the program, children choose real-world problems in their area of interest and develop projects that will make a difference in those areas. Inspired by Tuggles, Fraise chose dog euthanasia, and Lucky Tails was born.

“The mission of Lucky Tails is to find forever families and provide second chances to homeless dogs on euthanasia lists in shelters across the USA,” Fraise says. 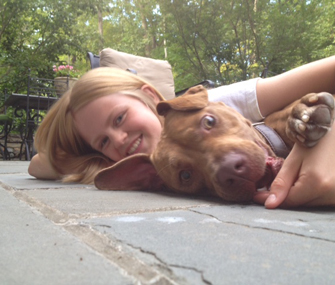 Photo by Catherine Fraise
Here Claire Fraise is with another one of her adopted friends, Lucky the Pit Bull.

In July, Lucky Tails rescued its first dog, Lucky, who had an amputated front right leg and was left at a shelter after her family moved. For the four months she was there she hadn’t been let out of her kennel. “She completely shut down. Everybody overlooked her because she was a Pit Bull and she had only three legs,” Fraise says. “When we took our first visit to the shelter, she won my heart with her eyes and sadness.”

After a month of training and socializing the pup, Lucky Tails found her a forever home where she is now living happily. Since then, Lucky Tails has rescued 14 dogs and found them all forever homes. All the dogs come from kill shelters across the country where they would have been euthanized because of lack of space or funding.