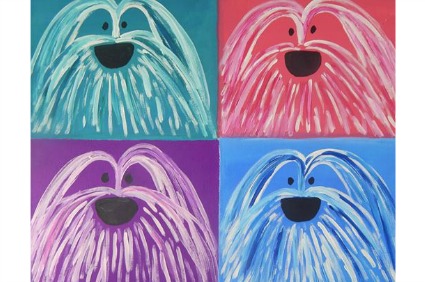 Starting a nonprofit seemed the natural thing to do for this teen. “Growing up, I’ve always been interested in philanthropy,” Blumenfeld says. “I collect used sports equipment at school to donate and am also very involved in Autism Speaks.” So she launched Wags 4 Hope to help educate pet owners about heartworm disease and the importance of awareness and prevention.

She spreads the word through speaking engagements, social media, her blog and a Wags 4 Hope club she started at her school. The 30 student members help local shelters by volunteering at events, raising money and even making blankets for the shelter dogs. “I’d love to expand Wags 4 Hope to other communities,” Blumenfeld says.

Painting for a Cause

To raise money for area shelters and the Shaggy Dog Rescue, Blumenfeld puts her artistic talents to work by creating whimsical dog paintings and donating proceeds from each sale. She takes custom orders and also donates her signature “Shaggy Dog” paintings to fundraisers. “That’s my favorite dog to draw,” she says. To date, Blumenfeld has raised more than $15,000 through her artwork.

Not surprisingly, the passionate 10th-grader is getting a lot of well-deserved accolades for her efforts. The Pet Animal Welfare Society in Norwalk, Conn., named Blumenfeld the PAWS Youth Ambassador. She was also honored by the American Heartworm Society and was named one of five heroes who made a difference in 2013 by Cesar’s Way magazine.

What's Next for This Talented Teen?

Blumenfeld has even taken her mission to her state representative, Tony Hwang, and is working with him on a bill that requires that heartworm prevention materials be given to dog owners when they apply for a Connecticut dog license.

It seems that she’s using all the right avenues to get the word out, so what’s next in Blumenfeld’s plan? “I’m hoping to write a children’s book to educate kids.”

To learn more about preventing heartworm disease in your dog or cat, visit petsandparasites.org, knowheartworms.org or heartwormsociety.org.