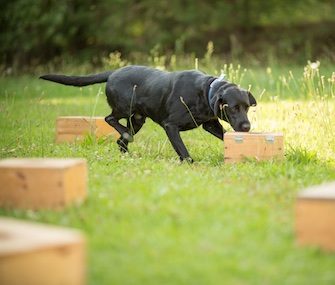 Dogs have a powerful sense of smell, and experts continue to find ways they can be trained to help with everything from detecting disease to finding exotic foods.

Recently, the canine detection experts at Auburn University showed that dogs could detect a specific virus in cows and track down illegally harvested red snapper hidden on fishing boats on the Gulf Coast.

“If something has an odor — and that’s just about anything —we can usually direct dogs to detect it,” says Dr. Paul Waggoner of Auburn University’s Canine Detection Research Institute.

He explains that almost everything has some type of volatile organic compound — chemicals that emit most scents or odors. The ability to train dogs to find those odors is usually more limited by a human’s understanding of the compound and how it behaves than a dog's ability to smell it. Trainers have to understand the material and how to control it in order to communicate to the dogs what it is they should do.

Below, we’ve rounded up a sampling of the incredible things dogs are sniffing out these days, including some of Waggoner's new research and experiments at Auburn.

Helping in the Medical Field

You’re probably heard those incredible stories of owners whose lives may have been saved by their dog, who kept sniffing them and signaling something was wrong, convincing them to seek medical help.

That capability has been put to good use in the last few years in the medical field. Dogs are being trained to detect several types of cancerbyidentifying breath samples from lung and breast cancer patients. 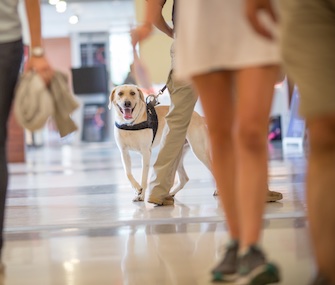 At the Penn Vet Working Dog Center, dogs are helping to develop a way to identify ovarian cancer in its early stages, when it is often less deadly. The dogs learn the scent of chemicals ovarian cancer emits in tissue and blood. One of the Penn Vet dogs, a Labrador Retriever, can identify it with 90 percent accuracy. Researchers hope to take what they learn from the dogs and apply it to technology that can be used in hospitals across the country, reports NBC News.

Assistance dogs have also been trained to alert diabetic owners to dangerously low blood sugar levels and signal the onset of an episode in people with seizure disorders, as well as smell gluten in products for people with celiac disease so they don’t ingest it and become sick.