The Animal Trainers Who Made Uggie and Joey Oscar-Worthy Stars 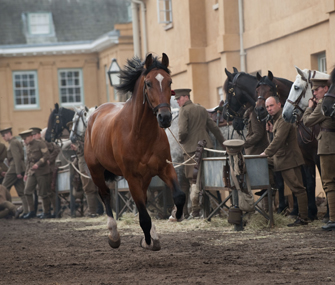 David Appleby
The character Joey on the set of War Horse.

If the Academy Awards had a category for “Best Supporting Animal” this year, Hollywood’s more hirsute stars just might steal the show. After all, creatures big and small have played major roles in at least two movies with Best Picture nominations.

In War Horse, Steven Spielberg’s six-time nominee about the moving bond between a boy and his horse, there’s the unforgettable lead equine, Joey.

In The Artist — a 10-time nominee — a scrappy Jack Russell Terrier named Uggie mugs for all he’s worth as the main star’s devoted sidekick. Last month, on the eve of his retirement, the 10-year-old dog took home the first-ever animal Oscar, a Golden Collar award.

But just what does it take for these species to make it big in Hollywood? Vetstreet spoke to the men behind the menagerie — their trainers.

On the set of War Horse, it took a rotating cast of 150 equines to play the two lead horses, Joey and Topthorn, along with the rest of the cavalry.

“There were a lot of things that I’d done in movies before War Horse,” says veteran trainer Bobby Lovgren, whose credits include Seabiscuit and The Legend of Zorro. “But I’d never done all of them in one.”

One thing that proved especially tricky was director Steven Spielberg’s request that Lovgren make Joey a real character. “Really, it was something that he was very, very particular about,” says Lovgren. “He wanted to have the horse be a character, an actor, per se, so we had to show a lot of emotion.”

As the old saying goes, just leading a horse to water is hard. “If you know horses, emotion is very difficult to convey,” says Lovgren, who relied on body language that was easily discernible to human viewers.

“If a horse has his head on the ground, you think he’s sad or sick or there’s something wrong,” he explains. “If his head is high, he’s alert. So you can portray happy or sad.”

And that was just facial expressions. Now try also aging a horse seamlessly on the silver screen.

It took a set of 10 horses to play Joey from birth through adult life — and each one had a body double. “I don’t want to tax them mentally, so we always have doubles,” says Lovgren, adding that all of the pretty horses had to look like mirror images of each other. “There were 14 hair and makeup people just to get them to look the same colorwise. It was really a full-time job.”

A full-time gig that was also a labor of love. “Going into it, you know that the film is going to be bigger than life,” says Lovgren, who even went so far as to fly his own horse, Finder, to England for the role. 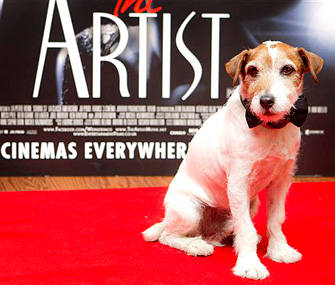 Joel Ryan, AP
The dapper Uggie, who starred in The Artist, attends a London screening.

A Silent Film Star Is Born

A trainer will be the first to tell you that not every creature has what it takes to succeed in Tinseltown. But, sometimes, just like their leggier counterparts, a lucky animal is plucked from obscurity to become a household name. Such was the case with Uggie, who was literally rescued a hair short of heading to the pound.

“A friend of mine called and said there was a family that had a Jack Russell who was really hyper, and they were going to get rid of him,” says Uggie’s trainer-owner Omar Von Muller. “So I took him home and started training him. He was pretty much set to be a star.”

To make it big, a canine needs more than just a pretty mug. “A good studio dog has never been afraid of anything, because I could literally be setting off fireworks in the frame,” says Von Muller. “There are dogs who do tricks, but if they get on set and freak out, they’re not going to make it in the movies.”

Clearly, Uggie had what it took: He’s costarred in countless films, including The Italian Job and Water for Elephants. “The casting agent might say, ‘We need a dog to scratch at the window, so that’s what he does,' ” says Von Muller.

More, of course, was required of Uggie in The Artist, including one scene that was so intense it wound up on the cutting room floor. (Spoiler alert!)

“There was a scene where Jean is going to shoot himself,” says Von Muller of the film's lead, Jean Dujardin, a Best Actor nominee. “But when he went to put the gun to his head, Uggie grabbed his sleeve and started pulling and tugging, tugging and pulling. Jean literally couldn’t lift his arm. He was acting, but Uggie didn’t know that.”

And that’s part of what makes animals such scene-stealers onscreen. “Dogs can’t tell the difference between a movie scene and real life," says Von Muller. "The dog is disturbed because it looks real, and he reacts to that.” Uggie’s do-or-die attempt to save his leading man left everyone on set in tears.

After all that hard work, Von Muller is happy that he and Uggie are getting their spot in the limelight. “It was the first time that we’ve been nominated for anything,” he says. “Animal trainers and their dogs.”