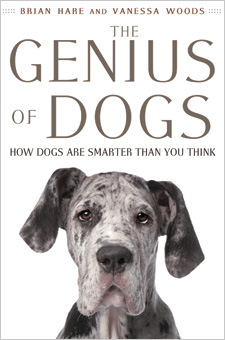 The love story between dogs and humans has its share of plot twists, from loving common burials to outright bans. Still, dog lovers often look at their pups and wonder just how the descendants of fearsome wolves wound up wagging their tails into our hearts and homes and workplaces. In The Genius of Dogs: How Dogs Are Smarter Than You Think, co-writers and researchers Brian Hare and his wife, Vanessa Woods, share the fascinating answer: Dogs domesticated themselves.

Hare's interest in the domestication of dogs began when he was an undergraduate at Emory University. He took a psychology class from a professor who was studying chimpanzees' ability to use gestures to communicate and understand intentions. This behavior, the professor argued, set humans apart from the animal world; none of the chimpanzees in his study could mimic it. Hare, convinced his dog, Oreo, could do what the chimpanzees in his professor’s experiments could not, said so. His own experiments eventually proved him right.

Q. When you claimed that your dog, Oreo, could understand human gestures, how aware were you of the implications of that statement?

A. Brian Hare: I really said it without thinking. I was a 19-year-old undergraduate at Emory University, and I was working with an amazing psychology professor, Mike Tomasello. Mike was one of the first to realize that human infants develop powerful social skills as early as 9 months, when they begin to understand what adults are trying to communicate when they point. Infants also begin pointing out things to other people. Whether an infant watches you point to a bird or the infant points to their favorite toy, they are beginning to build core communication skills. By paying attention to the reactions and gestures of other people, as well as to what other people are paying attention to, infants are beginning to read other people’s intentions.

Mike knew that our closest living relatives, the great apes, could not use human gestures, so he thought that perhaps this ability was unique to humans. But like many dog owners, I'd spent countless hours playing fetch with my childhood dog, Oreo. If he lost a ball, I’d help him find it by pointing in the right direction. When Mike told me that a chimpanzee couldn’t follow a human point to find food, I blurted out, "My dog can do that!" and it all began from there.

Q. Why is the ability to understand inferences so important?

A. When an animal encounters a problem in the wild, there is not always time to slowly figure out a solution through trial and error. One mistake can mean life or death. This is why animals need to make inferences — fast. Even when animals cannot see the correct solution, they can imagine different solutions and choose between them. This leads to a lot of flexibility. They might solve a new version of a problem they have seen before, or they might even spontaneously solve new problems they have never seen before.

Q. In the book you describe an experiment on foxes in Siberia. What does this experiment tell us about how dogs, and maybe even humans, were domesticated?

A. Probably the greatest and most unknown genetic experiment of the 20th century was conducted by Dmitri Belyaev in Siberia. He managed to domesticate an entire population of silver foxes by controlling for one variable — how friendly the foxes were toward humans. After 45 generations, these foxes do not just resemble dogs in their behavior (they wag their tails and will lick your face); they even resemble dogs physically, complete with floppy ears, splotchy coats and curly tails.