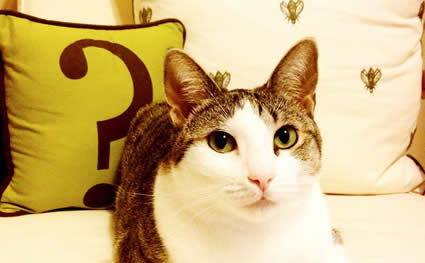 Credit: Wendi Aarons
Lola: She might look dainty, but she's one feisty furball.

It’s 8 o’clock at night. The kids are asleep, the house is quiet, and my husband Chris and I are contentedly watching TV on the couch. We’ve just about reached total relaxation when our peace is rudely interrupted by the distinctive noise of cat claws scrabbling on a hardwood floor. A streak of fur suddenly zooms past our feet, sloppily slides into the kitchen, crashes into a chair and we hear a loud “meow.” Then — total silence. We shrug and go back to our TV show, but then the blur of fur quickly reverses course and races past us once again, this time knocking over water glasses in its wake. But instead of freaking out at the Looney Tunes–style ruckus happening, my husband simply pauses the TV, rolls up a magazine and walks toward the meowing. “Let’s go look at what Lola caught this time,” he sighs. “Better be something good.”

A Kitty With a Cause

You see, rather than just coasting by on her good looks, our calico cat, a petite little girl we named Lola, has instead decided to contribute to our family by using her strong feline instincts to catch bugs. A lot of bugs. In fact, in her brief 18 months of life, she’s pretty much become the world-champion bug tracker. (Not that they have competitions for cat bug tracking, but they totally should and I’m not just saying that because I know my cat would win a lot of cash and prizes.)

One might think that a kitty who spends 100 percent of her life indoors wouldn’t even know what a bug is, but Lola has definitely seen her fair share. Then again, we do live in Texas where there’s not exactly a huge distinction between indoors and outdoors. Our house has airtight windows, airtight doors and regular treatments of chem-free bug spray from an exterminator, but the little creatures still seem to sneak in on a regular basis. Or the “little terrifying creatures” I should say, because the number-one thing Lola has caught in our house has been — scorpions. Oh, yes. Everything’s bigger in the Lone Star State, even the creepiness of our household pests.

When Lola was just a few months old, I saw her batting something around near the front door. I thought it was just a piece of yarn, but upon closer inspection it turned out to be a huge scorpion that I then whacked with a rolled-up magazine about 100 times while screaming, “Huge scorpion! Huge scorpion!” Lola was very upset when her new friend suddenly disappeared into the Dustbuster that day, but it wasn’t long before she found another creepy friend to bat around. And another. And another.

(Because cats aren't immune to scorpion venom, we try to get the little buggers away from her as quickly as we can.)

No Bug Is Safe

Besides scorpions, Lola’s also tracked lizards, geckos, yellow jackets, a beetle, and some giant flying thing we couldn’t even identify with a science book. She is so relentless in her pursuit of these invaders that we don’t even see them until she corners them and tells us they’re in the house. We know when she’s zeroed in on one because she’ll sit and meow until we come find her. Like the other day when she was yelling at the shutters in my office. I thought she was just being a crazy cat until I heard a loud buzzing noise. Sure enough, she’d tracked a giant wasp in the window and was so proud of herself that she napped in my desk chair the rest of the afternoon. “Bug hunting is exhausting,” she seemed to say when she flopped her paw over her eyes and started snoring.