The Messy History of Poop Scooping 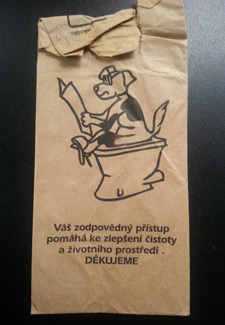 Michael Brandow, Facebook
A poop bag from the Czech Republic.

Despite how accepted it now is to pick up after your dog, some still resist. Although it has had the law for many years, Paris is still known as a hotbed of scoop-scofflaws, despite a force of around a hundred plainclothes officers tasked with enforcement of this and other littering laws. And even New York recently had to up the fine from $100 to $250 in the face of an increasing number of violations.

But dog poop marches with the times like anything else, and both enforcement and encouragement have gone high-tech. It's now possible to identify an individual dog's droppings by DNA, and a company called PooPrints offers its services to property management companies so they can determine who's neglecting to clean up after their dog in common areas.

Elsewhere, there are attempts to use positive reinforcement: In Mexico City, an Internet company is running a promotion that gives free minutes of Wi-Fi when poop bags are deposited in a special bin. And in Taiwan, one city gave out lottery tickets in exchange for bags of poop with a chance to win a prize of $2,000.

But perhaps the most forward-thinking approach is happening at a dog park in Arizona with a specially designed device that converts dog waste to electricity to power a light. Created by graduate students at Arizona State University, the technology is playfully named Energy Transformation Using Reactive Digestion, or E-TURD. There's still work to be done to educate dog owners to use it, and it may sound crazy now, but remember: At first, so did the poop-scoop law.