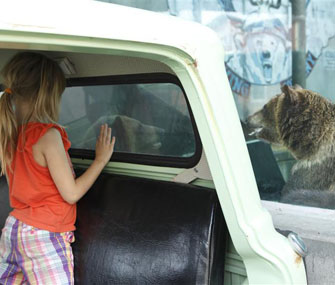 Courtesy of PGAV Destinations
A little girl sits in the cab of a truck that bears on exhibit can bounce up and down.

A major goal of any zoo is reaching the public, so another aspect of researching a species is coming up with the educational message. "We usually look at conservation issues and work up a kind of story based around that animal," Tarpley says. "It's important to create a storyline that will create a place that people will be immersed in."

One recent project that put all those considerations together in a clever way is the polar bear exhibit at the Louisville Zoo. There are several connected areas, one of which provides a stage for both changeable enrichment and an educational message."It's a room that is all concrete, so it can be washed down really easily. The keepers will go in there and set up all of this super fun stuff for the bears — trash cans full of treats, ice blocks and so on."

The bears don't care that the trash cans don't look natural, and they fit perfectly into the story the exhibit tells: The room is designed like a loading dock. "The whole exhibit looks like you're in the middle of a fictional town modeled after Churchill, [Alaska], where the bears are starting to come into town because they're losing food sources and habitat."

A Peek Behind the Scenes

Tarpley says another trend is to let the public see caretaking activities that used to happen behind the scenes. A big reason for that is that it helps visitors feel comfortable that the animals are well cared for."If they're not satisfied with the condition of the animals, they don't come back," she says. "If you can't get people through the doors, if they're not having a good time, they're not going to learn anything, they're not going to be inspired."

Training demos and on-exhibit enrichment let people see active animals engaged in interesting behavior. That increases empathy — and it's also just fun. "It's very engaging to see the animals figure things out, to see the keepers' relationships with the animals. It's relatable," Tarpley says.

Still, much of what's vital to the animal's well-being isn't visible to the visitor. Sometimes that's as simple as a water source that's hidden from sight because it's not visually appealing. Other times it's more complex. The Louisville polar bear exhibit, for instance, is designed to make sure the bears get as much exercise as possible moving between the different sections. "That's a critical part of their physical health," she says. "They go up and down stairs and ramps, rotating between them throughout the day."

Engaging With the Animals

Of course, the biggest complaint visitors often have with zoo exhibits is that what isn't visible is the animal itself — one problem that never arose with those old concrete cages. "If you give the polar bear a 2-acre exhibit and it really likes sleeping in that far corner, guests are happy it's big and naturalistic, but what they're going to walk away with is, 'That stinks. I didn't get to see that polar bear,'" she says.

So there are ways that designers try to get the animals to prefer the areas where they are visible. "By understanding what the animals like, we can do things like provide shade or a pool right up next to the window," Tarpley says. "Oftentimes when you do that sort of thing, the animals start to become engaged with the guests."

Those opportunities for engagement can be designed into the exhibit — at the Louisville zoo, people stand in a viewing area that looks like a truck cab that the bears can bounce up and down. But the animals can also create their own viewing areas, and they don't have to obey the rule about not tapping on the glass.

"I've watched polar bears swim up and bang on the window and startle people who weren't paying attention to them," Tarpley says. "Little kids will jump and scream, andthe bears look so contented. When that happens, it's awesome."