Home ›
Our Pet Experts ›
Amy Sinatra Ayres ›
"The Pit Bull Life": A Q&A With the Authors

"The Pit Bull Life": A Q&A With the Authors 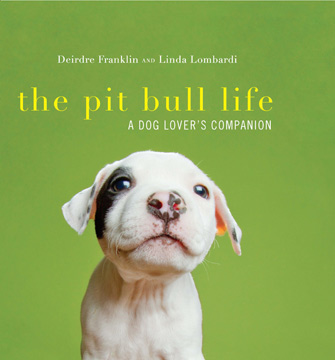 Courtesy of Countryman Press
We talked to Linda Lombardi and Deirdre Franklin about their new book, The Pit Bull Life: A Dog Lover's Companion.

In The Pit Bull Life: A Dog Lover’s Companion, authors Linda Lombardi and Deirdre Franklin tell readers everything they need to know about owning a dog that is lovable — but faces an undeservedly bad reputation.

Owners of dogs categorized as pit bulls* often endure criticism and discriminatory laws, so Franklin, a long-time pit bull advocate, wanted to help empower them to do more to keep their dogs safe and to educate people in their local communities about the dogs.

Lombardi, a Vetstreet contributor and author of two additional books, said she was inspired by Franklin's work and frustrated by all the misinformation about pit bulls that is “so easily refuted by the facts.”

We talked with the authors about their new book, which is filled with beautiful pictures of pit bull-type dogs, as well as inspiration and optimism about the dogs’ future.


Q. What should someone know if they’re thinking of adopting a pit bull?

They should know that they might be perceived differently by strangers and even family, but that their dog will challenge negative stereotypes on a daily basis just by being the awesome dog that pit bulls tend to be. They should also know that there is an incredible community of pit bull-loving people out there that they should find and connect with as soon as they can. I have hundreds of friends and acquaintances worldwide who live for their dogs like I do.

Q. What do you feel is most often misunderstood about pit bulls?

Lombardi: We could write a whole book about this... oh right, we kind of did! But here's maybe the biggest thing: Many, probably most, of the dogs we call "pit bulls" are mixes, often with no "pit bull" in them at all. Studies have shown that even experts are terrible at looking at a dog and telling whether it any of its ancestors were one of the recognized pit bull type breeds. Where our grandparents were content to use the words "mutt" or "mongrel," we've come to use "pit bull" for any short-coated dog with a slightly big head. This makes it simultaneously ridiculous and tragic that these dogs are targeted because of some notion about what their breed history predicts about their behavior, never mind the fact that those notions are mistaken in the first place.

Q. As you write, there was once a lot of fear of German Shepherds, but the fame of Rin Tin Tin and stories about the breed's heroic deeds, in part, helped to turn the public’s perception of the breed around. Are you optimistic that the tide is turning in favor of pit bulls?

Franklin: Yes! I'm very optimistic. It has been wonderful seeing the difference in attitudes about pit bulls in the ‘90s versus how people perceive them today. People will chime into a conversation about pit bulls in a positive way that they wouldn't have just a few years ago. We have an unbelievable amount of celebrities, books and calendars, advocates, rescue groups and television programs that are highlighting what wonderful dogs they are.

Q. You write that, "Your dog needs to be twice as good as other dogs for many people to think it’s half as okay.” Should potential owners take that into consideration before getting a pit bull?

Franklin: Any pit bull owner will tell you about their experiences encountering someone who is dramatically pulling their child away from their path or who is yelling something cruel in passing. You will need a thick skin and the ability to bite your tongue. How do you educate people in these moments? Most of the time, the only thing you can do is have a well-behaved dog representing his kind in the best way possible.

And you will have many positive encounters as well. When I travel, people stop me to discuss my pit bull tattoos or pit bull-themed clothing and it's usually to share their pit bull adoption or positive pit bull experiences with me. Even my local TSA agent had me peeping at pictures of his newly adopted pit bull mix on his phone this morning!