The Pros and Cons of Hand-raising Zoo Babies 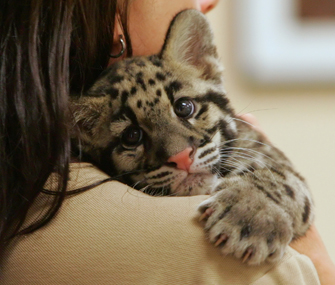 When you see a photo of someone feeding an adorable baby zoo animal a bottle, maybe it makes you a little jealous. How come your job isn't that much fun? But for zoo staff, it's much more complicated than that. Often, having to hand-raise an animal is not great news because it means something went wrong with mom or baby, and it's not easy to substitute for natural parental care. Other times, to keep a species going, people actually do more for babies than nature would. Whatever the reason, it always takes a lot of extra work and planning.

For most zoo animals, hand-raising only happens when there's a problem. "We always strive to have the dams raise their offspring — that's always our No. 1 goal," says Dave Bernier, general curator at the Lincoln Park Zoo. "There are times when we have to intervene, and all of those times are based on the well-being of the offspring or the dam."

A baby may need to be removed from the mother because it's not doing well, but it could also be because the dam's health is at risk and raising the baby while recovering would be too stressful, Bernier says. Other times the mother may not be caring for the baby properly. At Lincoln Park, the staff recently hand-raised a klipspringer, a tiny African antelope, because the mom was being aggressive toward it. Although sometimes it's natural for animals to be a bit rough with their young, the staff decided not to take chances.

Whatever the reason for removing a baby from its mom, the solution isn't spur-of-the-moment. Bernier says his zoo always has a contingency plan in place when breeding an animal, even though they don't usually need it. "A birth management plan always has this component — when would we intervene, and what would we do?" he says. "We do this research and have this conversation ahead of time."

And the plan needs to be long-term, taking into account what kind of lives the adult animals lead. For some it's relatively simple, like the klipspringer, which doesn't need to learn to get along with a group. "They're not really a herd animal; they live in pairs or they live solitarily, so [hand-raising's] not a huge impact on their development," he says.

But with more social animals, the less time they spend away from their group, the better. In some cases, keepers can find a way to care for the baby without removing it. That's what they've done at Lincoln Park with herd animals such as the Arabian oryx, in which species the young naturally spend their time hiding while the mother comes and goes. "We're able to separate everyone away from the kid, and we can go in and offer the bottle and leave," Bernier says. "The only time the animal is separate from the group is when we're doing the feeding, so there's very minimal impact."