The Real Life of Earthworms 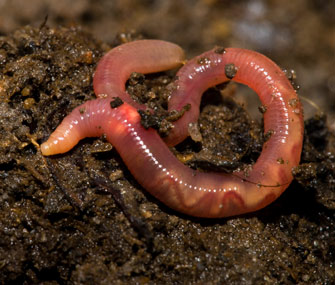 You might think scientists know everything there is to know about earthworms. After all, how hard could it be to study a creature that you can dig up in almost any backyard?

But there's a lot you probably don't know about earthworms and a lot even the scientists don't know — and you might be able to help them find out more.

Let's start with this: Did you know that there's more than one species of earthworm? The species fall into three groups that live in different parts of the soil and have different feeding habits. Here's another fact that might surprise you more: Chances are, that earthworm you dig up in your garden is actually an invasive species.

When we think of invasive species we often think of competition among similar creatures — one fish or bird taking over the habitat of another fish or bird. But as with every other invasive species, introducing worms to an ecosystem that developed without them has an effect on everything that lives there.

Non-native earthworms have been in North America for a couple hundred years, brought over from Europe with soils and plants. More recently, Asian species, sold as fishing bait and for composting, have started to spread. "They have such voracious appetites and can live at such high densities that they're the ones people are trying to focus attention on now," says Ryan Hueffmeier of Great Lakes Worm Watch.

This concern is very clear in the Great Lakes region, where there are no native earthworms, Hueffmeier says. "Where the glaciers came down and scraped everything down to bedrock, the ecosystems developed earthworm-free."

We think of soil as just dirt, but there's actually quite a complicated ecosystem under our feet, so any new species can upset the balance. In these earthworm-free forests, when leaves fall onto the forest floor and plants and animals die, they build up into what's called the duff layer. "In this area, it was just fungus and bacteria that broke down the organic material for plants to consume and take up," Hueffmeier says. "Earthworms come in, they do their job and do it extremely well — they take that forest floor and convert it into the rich black soil you find in your garden."

That sounds great — but the local plants and animals in the Great Lakes region evolved to live with the duff layer, not in the rich soil associated with earthworms. In addition, the excess nutrients left by earthworms can wash out in a heavy rain, causing problems similar to fertilizer runoff. The differently textured soil is an issue as well. "There's a mat of fine roots in that duff layer — that's where a lot of our native plants put their root system," Hueffmeier says. "When that duff is gone, it's a lot harder for them to put their roots into the mineral soil."

Working Against the Natural Order

One important plant, the sugar maple, is a good example of the changes wrought by earthworms. "When you go to an earthworm-free sugar maple stand, there'll be carpets of seedlings and saplings," Hueffmeier says. "Go into a heavily invaded forest and there's a sapling here, a seedling there, and they don't look healthy. It's not that they can't grow — they do, but their density and success rate goes down."