The Run for the Roses Starts in a Bed of Clover 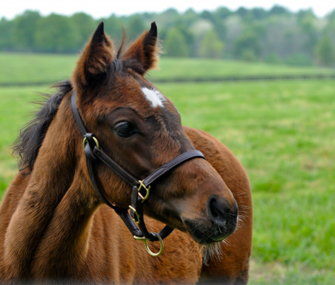 This Saturday, 20 sleekly muscled and finely tuned 3-year-old Thoroughbreds will leap from the starting gate at Churchill Downs, marking the running of the 139thKentucky Derby. Amid this display of spirit, speed and beauty, it will be hard to imagine that, not too long ago, these elite runners were adorable, fuzzy-eared foals capering around their pastures on spindly legs. While one part of the horse racing world gears up this week for Saturday’s classic race — which is often referred to as "the most exciting two minutes in sports" — another part of it has been experiencing excitement of a different sort this spring: the birth of a new group of foals.

Away in a Manger

Not far from the bustling, high-stakes world of the racetrack shed row is the quiet oasis of foaling barns and paddocks. About a third of the approximately 25,000 Thoroughbred foals who are registered with The Jockey Club each year are born in Kentucky’s bluegrass country.

From January to June, the big breeding farms — and the smaller ones as well — anxiously wait for and then dote on their foals. As any human parent will understand, it’s a time when farm managers, veterinarians and anyone connected to the breeding industry usually go without much or any sleep.

Because every Thoroughbred, regardless of his actual birthdate, automatically turns a year older on January 1, racehorse breeders try to time foaling due dates as early in the spring as possible. This way, when they start racing as 2- and 3-year-olds, the older colts and fillies will theoretically have a “leg up” on the younger horses.

Breeders pin their hopes and dreams on each foal’s pedigree and pore over breeding charts and statistics in order to find the right match between a mare and a stallion in order to (hopefully) produce a champion racehorse one day. In a little bit of male chauvinism, many breeders put a heavy emphasis on sire, or stallion, lines: A foal will often be described exclusively as being “by” a particular stallion.

This Year’s Most Famous Foals

Recent history, however, may be helping to change that attitude, at least a little. On a set of farms not far from the Churchill Downs grandstand where racing fans sip mint juleps and sing “My Old Kentucky Home,” two of the greatest race mares in history recently delivered their latest bundles of equine joy.

“Super mares” Rachel Alexandra and Zenyatta both rewrote the history books as they blazed through the racing scene before retiring to become broodmares. Rachel Alexandra and Zenyatta each won Horse of the Year honors in 2009 and 2010, respectively, beating out “the boys” in a feat that is hard to equal. Rachel Alexandra is famed for winning the Preakness Stakes in 2009 — the first filly to do so since 1924 — among other accomplishments. And Zenyatta, who chalked up a record-breaking 19 wins out of 20 races during her career, was the first filly to beat an all-male field in the 2009 Breeders' Cup Classic.