Home ›
Our Pet Experts ›
The Search for Quiz, the Lost Dog (Plus, 16 Tips for Finding Lost Pets)

The Search for Quiz, the Lost Dog (Plus, 16 Tips for Finding Lost Pets) 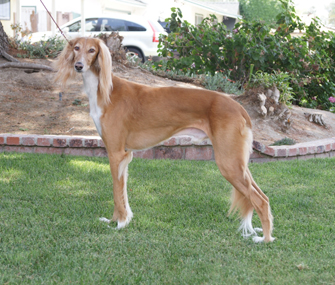 Photo by Terry Saunders
Quiz today, a year and a half later.

Nobody plans to lose a dog. Maybe that's why nobody plans ahead how to find a dog (although, if you haven't microchipped your pup yet, here's a reminder as to why you should!). But acting fast and having a plan are two key ingredients to finding a dog once lost.

When your dog is first lost, your instinct is to search high and low. Check the worst places — like roadways — first, the most likely places second, and, eventually, every other place.

It won't take you long to realize you can't do it alone. You need helpers in the form of both friends and strangers — you can find the latter with posters and several contact services now available (and listed at the end of this article).

You need to alert anyone who might notice a strange dog; People like postal workers, sanitation workers, school bus drivers, veterinary clinics, animal shelters, delivery people and neighborhood kids are fantastic allies. After the first day it's easy to be overwhelmed by what appears to be the enormity and hopelessness of the situation. But hope is sometimes your best weapon.

The date was November 23, the day before Thanksgiving, and that seemed like an ideal time for a group of friends to drive a couple of hours to let their dogs run in the Mojave desert near Edwards Air Force base. The dogs, all Salukis, relished the open areas — plus the occasional jackrabbit chase. It was after such a chase that one dog didn't return.

The missing dog, Quiz, belonged to Terry Saunders, of San Pedro, California. "After about 20 minutes of calling him, we jumped into a car to search," she recalls. "I thought he'd probably injured himself and couldn’t return."

Saunders and her friends searched by car and on foot throughout the day; Saunders also called Quiz's breeder, who made up flyers and traveled there to post them and join the search.

Night fell. Saunders slept (sort of) in her van where Quiz had last seen it, hoping he'd return. He did not.

November 25: More friends came to search. None of them lived nearby; it was an hour's drive for the closest. Then news: Quiz, still wearing the blue jacket he'd been wearing when he was lost, had been spotted 10 miles away by a camper who'd seen a flyer! Saunders spent that night where Quiz had been seen, also setting out blankets and food in various places.

November 26: A plea went out for help on the Saluki-L chat list, a worldwide email discussion group for Saluki owners. While the group is often preoccupied with heated discussions about everything Saluki, they banded together for a member in need. More than 20 helpers showed up to post flyers, talk to campers and look for Quiz. Those who couldn't help in person sent their prayers and positive thoughts (and later in the ordeal, money to help with search expenses).

The food was missing and the blankets were scrambled in one of the places Saunders had left them the night before. She moved her camp there.

November 27: Saunders was cooking enticing food on a campfire when she saw Quiz. He approached to within 200 yards, but ran off when she stood up. "He was too far away to recognize me," she said. She later found out he'd been chased by people on motorcycles the night before, which would have made him extra leery. "They thought they could tire him out and catch him. They meant well."