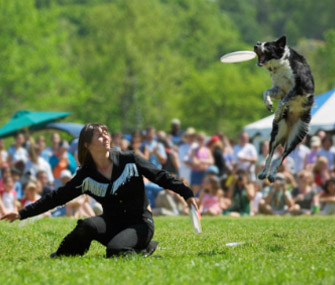 Steven Donahue
Melissa Heeter and her dog, Viola, perform a "hurdle over" maneuver during a freestyle competition.

Got a dog who relishes marathon games of fetch and who shakes the life out of his toys? You may have a superstar athlete in the making.

Melissa Heeter knows this firsthand. As the first woman to win a flying disc dog world championship, Heeter purposely adopts dogs who tend to use their mouths too much.

Pups like Viola, a 6-year-old Cattle Dog mix who can make hairpin turns at super speeds and acrobatically snatch a flying disc in midair.

“We like difficult dogs for this sport,” says Heeter, a veteran dog trainer who helped create the United States Disc Dog Nationals. “Dogs with strong prey drives do well in this sport when properly trained to rechannel those natural instincts.”

What Exactly Is Canine Disc?

Dogs have been fetching flying discs since their invention, but you can credit Alex Stein and his Whippet, Ashley, for starting the canine sport.

In 1974, the pair interrupted a nationally televised baseball game between the Los Angeles Dodgers and the Cincinnati Reds by racing onto the field. Stein flung discs for Ashley, who snared them in full sprint for about eight minutes before security escorted them off the field.

The rules vary slightly depending on the disc dog organization, but there are two primary competition formats: toss-and-fetch and freestyle.

Toss-and-Fetch: Don’t blink or you'll miss the action. Dogs line up behind a line while handlers hold stacks of discs. Top points go to the canine who catches the most discs in 90 seconds over the greatest distance, which is typically 40 yards.

Freestyle: Think of this as a cross between figure skating and gymnastics — only for dogs. Each high-energy routine lasts between 90 seconds and three minutes, featuring choreographed musical routines in which the dog and the handler are judged on execution, creativity and how much of the field the duo covers. Maneuvers include vaults, midair catches, flips and a tricky technique called the dog catch — handlers must catch pups in their arms just as the dogs grab the discs in the air.