The Surprising Challenges — and Dangers — of Being a Wild Animal Matchmaker

Roger Sweeney, assistant director of the Virginia Zoo in Norfolk, is the studbook keeper for four species of birds: the Andean condor, the fairy bluebird and the northern and southern ground hornbills.

For Sweeney, birds often present different matchmaking challenges compared to mammals — in some cases, he may even be a bit envious of the slow timeline for breeding sloths.

"The easiest thing to manage as a studbook keeper is something that lives a long time, breeds slowly and lives in pairs," he says. Birds, however, tend to have a short lifespan, which also means a shorter reproduction period. Many feathered species also have complicated non-monogamous mating systems, so you need to keep more than just two birds to get one pair to successfully breed.

That said, Sweeney does manage one species with an interesting trait that's more common to mammals: Southern ground hornbills live in extended family units, and juveniles actually help to rear the chicks.

His analysis of their studbook data shows that birds who are raised independent of family groups are less likely to breed successfully as adults. "Compared to other birds that stay with parents for short periods of time," he says, "these birds have a lot more active social learning."

In other words, simply making good genetic matches isn't enough — Sweeney has to approach his job with an eye toward animal behavior as well.

According to Sweeney, a bird with valuable genes who maybe hasn't been raised right can sometimes be carefully paired with a mate it can learn from — and prosper.

Thanks to his work, Sweeney has also changed the level of care that these birds receive at other zoos, which now also keep the birds in family groups. 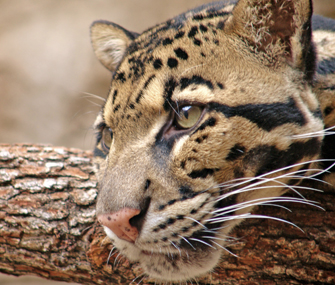 Thinkstock
Scientists believe that clouded leopards only get together for one thing — to mate.

Norah Fletchall is vice president of conservation for the Indianapolis Zoo, as well as a member of the committee that's responsible for the oversight of all Association of Zoos and Aquariums studbook keepers, from Partula snails to elephants.

For years, Fletchall was the studbook keeper for clouded leopards, and she had to deal with a problem that she delicately calls "mate incompatibility." Translation: Sometimes you introduce a pair and they try to kill each other.

"We don't want to put these animals' lives at risk, so people were hesitant to put them together," she says. And this is obviously a problem if you want to produce babies.

Little is known about the behavior of these cats in the wild, although it is believed that they come together only to mate. Since this wasn't working in captivity, Fletchall says, the idea eventually arose to introduce them as youngsters and raise them together.

A studbook keeper's job is to make sure that the genetics of a population stay diverse, avoiding over-breeding in some animals and under-breeding in others. So while these arranged marriages have been helpful, they've also introduced complications.

"What this means is that when you pair them, you pair them for life," Fletchall says. "If a male's line isn't well represented, and he's produced six litters with the same female, it's a dilemma."

Much like Sweeney, the clouded leopard studbook keeper has to consider behavior as well as genetics. So if adult clouded leopard pairs need to be rearranged, careful attention needs to be paid to age and size — but also individual personality.

The job of a studbook keeper is obviously rewarding, especially since hundreds of zoo people do it on top of their regular gigs. "It's a great way to get a broader look at things and contribute to conservation," Fletchall says. She even calls it "fun," although managing a huge database is the kind of fun that may not necessarily suit everyone.

"You have to like to dig into detail," she says. "If you like things to be organized, being a studbook keeper is a lot of fun. I had records going back to 1890. You have a whole history in front of you all of the time."