Home ›
Our Pet Experts ›
Caroline Golon ›
The Things We Do for Love: "I Dote on My Iguana!"

The Things We Do for Love: "I Dote on My Iguana!"

Caroline Golon, the human behind the popular humor blog Romeo the Cat, shares the stories of pet owners who go the extra mile for their pets in this series, The Things We Do for Love. 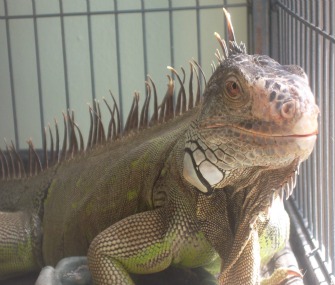 Kristen Brown of Jacksonville, Fla., loves animals. She is a regular foster parent for dogs, cats, guinea pigs and any other animal that needs a safe and loving place to stay while awaiting adoption. She spoils all of the pets in her care, but it’s her iguana, Chowder, who gets the real pampering!

Since iguanas eat a lot of fresh vegetables, Brown often prepares an elaborate salad for the nearly 3.5-foot Chowder to enjoy. “It looks like it was made in an upscale restaurant!” Brown says of the meal. "Next thing you know I'll be adding a garnish to the side!” she adds with a laugh.

As a special treat, Brown hand feeds Chowder fresh strawberries. “He likes that a lot,” she says.

To ensure Chowder gets enough of the nutrients he needs, Brown also sprinkles a calcium and vitamin D powder on his food. And because iguanas get much of their water from their food, Brown always makes sure to spray lots of extra water on Chowder’s meals to keep him well hydrated.

Best Room in the House

To keep Chowder warm and comfortable, Brown keeps his cage in the warmest spot in the house — her son’s bedroom. “He’s right in front of the window and gets full sunlight,” she says. “I hated to put him there because I wanted him to be where I was all the time, but it’s the best place for him,” she says. What does her son think of the arrangement? “He loves it!” Brown says. “He says Chowder’s the best roommate he’s ever had.”

READ MORE: Reptiles/Amphibians, Living With Pets, The Human - Animal Bond, The Things We Do For Love

READ MORE: Reptiles/Amphibians, Living With Pets, The Human - Animal Bond, The Things We Do For Love