Home ›
Our Pet Experts ›
Caroline Golon ›
The Things We Do for Love: "I Happily Cater to My Rabbits!"

The Things We Do for Love: "I Happily Cater to My Rabbits!" 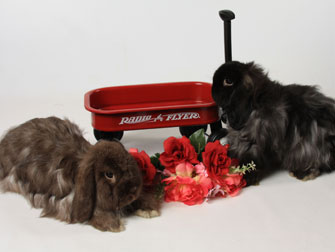 Credit: Natalie Reeves
Mopsy and Robin, the best of friends.

Natalie Reeves, an attorney in New York City, wanted a dog, but her long work hours made it impossible. Instead, she volunteered at the Manhattan Animal Care & Control. It was there she realized it wasn’t a dog she needed to make her life complete — it was bunnies.

“I never thought I’d be living with four rabbits,” Reeves says. “I thought that would be really weird.” But one by one, the rabbits took over her heart ... and her home.

It Started With One

Reeves met Mopsy while volunteering. “I was drawn to her,” Reeves says. “Then one day I opened her cage. She looked at me, put her paws on my shoulders and kissed me!” Reeves adopted her.

Reeves soon learned that rabbits require a lot of special care, especially longhaired lops like Mopsy. She ordered organic hay for Mopsy to eat, took her to a special vet and groomed her long, silky fur every day.

And Then There Were More

One day, a litter of bunnies arrived at the shelter. Reeves couldn’t resist, and another longhaired rabbit, Robin, came home with her. Robin’s siblings went to another loving home.

But a year later, Robin’s sisters were returned to the shelter when their owners moved to China. Right away, Reeves knew she wanted them, even though it meant rearranging her home. “I had to get rid of stuff to make room for the girls,” Reeves says. “And never regretted it.”

Because of territorial issues, the rabbits are separated in Reeves' apartment. The siblings, Goldie and Queenie, have the larger master bedroom to give them plenty of room to hop around. Mopsy and Robin shared Reeves' bedroom until last July, when Robin passed away. Mopsy became so depressed that Reeves slept on the floor for two months to keep the grieving bunny company. It took time, but they both healed.

READ MORE: Rabbits, Living With Pets, The Human - Animal Bond, The Things We Do For Love

READ MORE: Rabbits, Living With Pets, The Human - Animal Bond, The Things We Do For Love