Home ›
Our Pet Experts ›
Caroline Golon ›
The Things We Do for Love: "I Started a Business for My Big Dog"

The Things We Do for Love: "I Started a Business for My Big Dog" 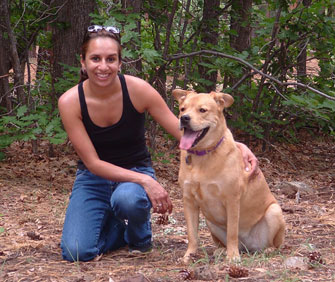 When Sonia Charry of Scottsdale, Ariz., adopted her new puppy, Nala, she had no idea that the mixed breed “mutt” would turn out to be the inspiration for a thriving new business.

Charry first met Nala when a friend of hers was pet-sitting the puppy. “The first time I picked her up, I was smitten,” Charry remembers. “She put one paw on each side of my neck and put her head on my shoulder.” Something compelled Charry to tell her friend, “If the owner ever changes her mind about this dog, let me know!”

For two weeks, Charry couldn’t get the puppy out of her mind.

In a happy coincidence, the puppy’s new owner decided she couldn’t keep the dog after all and began searching for a home. Charry was overjoyed. “Yeah, I will take the dog!” she told her friend. And Nala was hers.

Making Room for the New Puppy

Nala was “all ears and paws,” Charry says. Adopted originally from a shelter, Nala’s breed was unknown. And so was how big she would become.

“She grew so fast!” Charry says. Nala went through an enormous growth spurt between 6 and 9 months, at which time no toys could withstand the growing puppy’s playtime. “I couldn’t find anything strong enough for her,” Charry says. “When she started chewing on a tree in the backyard, that’s when I knew I had to do something.”

Luckily, Nala maxed out at a relatively moderate (at least, compared to some giant breeds) 70 pounds but left Charry with the understanding that there was a gap in the marketplace for big dogs. So Charry and her husband, Hernan, started Paw Posse, an online store and resource just for big dogs.