Home ›
Our Pet Experts ›
Caroline Golon ›
The Things We Do for Love: "I'd Do Anything for My Puppy Mill Dog"

The Things We Do for Love: "I'd Do Anything for My Puppy Mill Dog" 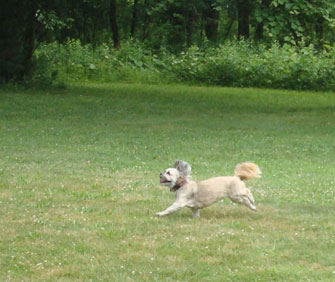 Credit: Julie Gurner
Without expensive surgery, the former puppy mill dog wouldn't have been able to walk, let alone run, after just a couple of years.

Caroline Golon, the human behind popular humor blog Romeo the Cat will share the stories of pet owners who have gone the extra mile for their pets in this series, The Things We Do for Love.

Nearly 12 years ago, Julie Gurner of Philadelphia thought she found the perfect dog — a Lhasa Apso puppy she purchased from a breeder on the Internet. But the perfect dog had an imperfection: a birth defect, due to poor breeding, that would cost Gurner thousands of dollars and countless hours to give her a normal life.

Fresh out of grad school, Gurner, then living in Boston, was ready for her own dog. But in 2000, the ill repute of many breeders selling their puppies online was not common knowledge. “They appeared to be a loving and caring breeder. We had phone conversations and everything seemed fine,” Gurner says.

But soon after the puppy arrived in Gurner’s home, she noticed something wrong with the sweet dog she’d named Thatcher. Her legs were bowed and she didn’t seem to be developing properly.

Vets diagnosed Thatcher with a congenital birth defect that would require expensive surgery. When Gurner called the breeder to complain, the breeder offered her another puppy instead. She refused. “If you are going to adopt a pet, you take on the responsibility to care for the pet you’ve chosen,” she says.

Gurner reported the breeder to authorities. Then she took Thatcher to the Hospital for Small Animals at Tufts University Veterinary School, where orthopedic specialist Dr. Randy Boudrieau agreed to perform surgery on Thatcher. The surgeon would break Thatcher’s small bones and place two pins and a plate in each front leg.