Home ›
Our Pet Experts ›
Caroline Golon ›
The Things We Do for Love: "Our Bunny Has Taken Over Our Home"

The Things We Do for Love: "Our Bunny Has Taken Over Our Home" 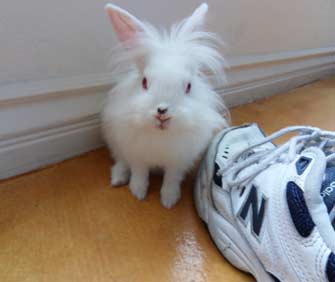 Christopher Nelson
It's no surprise this face proved to be irresistible.

When Las Vegas resident Christopher Nelson took a business trip to Los Angeles, he never dreamed he’d come home with a pet bunny — much less one that would become the center of attention in his busy household.

It all started when Nelson, the CFO of a handbag company, took his fiancee, Tamara, and her 14-year-old daughter with him on the trip. The trio traveled to Southern California in a rented cargo truck in order to transport merchandise for the business.

One day, as the three meandered around the Fashion District, they came upon rabbits for adoption. One fluffy white rabbit in particular captivated Tamara and her daughter, and even Nelson says he couldn’t resist the sweet face. “We decided we had to have that little white bunny,” Nelson says. The family adopted him and named him Einstein because of the shock of unruly white fur on the top of his head.

Tamara’s daughter sat in the back of the truck and held Einstein’s box for the entire 270-mile journey home. Once they returned to Las Vegas, the family didn’t know how their three cats would react to the strange little creature. They introduced Einstein slowly to the rest of the furry household, keeping him in a separate room until all of the animals could get used to each other’s presence. 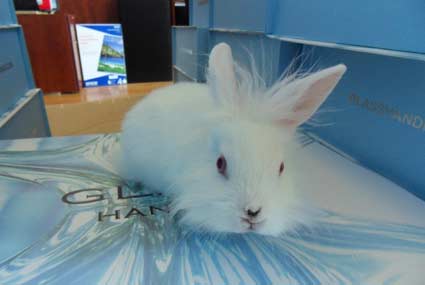 Christopher Nelson
Einstein has now become the center of attention in Nelson's home.

After the initial acclimation period, Einstein was brought out from his seclusion. He immediately became the center of attention and “the favorite.” Because the family hated to keep Einstein in his cage, they decided to see how the bunny would do roaming free in the house. “We live in a loft and there’s a concrete floor, so we decided if he made a mess, it wouldn’t be bad,” Nelson says.

READ MORE: Rabbits, Living With Pets, Adoption, The Things We Do For Love

READ MORE: Rabbits, Living With Pets, Adoption, The Things We Do For Love