Home ›
Our Pet Experts ›
The Things We Do for Love: "Our Cat Wears a Diaper"

The Things We Do for Love: "Our Cat Wears a Diaper" 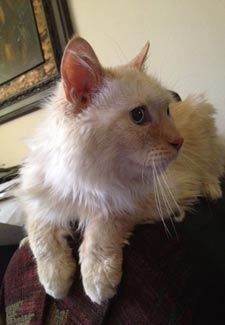 Some people dress their pets in sweaters or tutus. Kristen Dewey and Michael Zamboni of Los Angeles dress their 18-year-old cat Cokie in a diaper.

Cokie, a fluffy white Ragdoll, is incontinent due to a fall from an 80-foot palm tree when he was just a year old.

The indoor cat had escaped the house and climbed up the tree. According to Dewey, she and Zamboni, plus the local fire department, spent several days trying to coax Cokie out of the tree. Finally, he jumped.

“He didn’t land on his feet,” Dewey says. Miraculously, Cokie survived, but his vet predicted the cat might eventually experience spinal issues.

Sure enough, when Cokie was 13, he developed incontinence and complete paralysis in his tail. Dewey and Zamboni were determined not to give up on Cokie and searched for a way to accommodate his needs.

The couple made their second bathroom into “Cokie’s room,” with a comfortable bed, litter box, food and water. Now, when the senior cat has accidents in his room, they are relatively easy to clean up. “He makes it to the litter box about half the time,” Dewey says.

So Cokie could be free to roam the house during the day, Dewey and Zamboni decided to put a diaper on him.

From baby diapers, to adult diapers, to dog diapers, Dewey says they searched everywhere for one that would work. Finally they found Simple Solutions, washable diapers designed for female dogs in heat.

Dewey lines the diapers with a sanitary pad for added protection. “I call the whole getup his ‘man pants’” she says.

Every night, Dewey and Zamboni remove Cokie’s “man pants” and put him in his bathroom. In the morning, they clean up the bathroom and Cokie (he often drags his tail in the mess), and put his diaper back on so he can spend the day as he pleases.