Home ›
Our Pet Experts ›
The Things We Do for Love: The Many Faces of Feral Cat Caretakers

The Things We Do for Love: The Many Faces of Feral Cat Caretakers 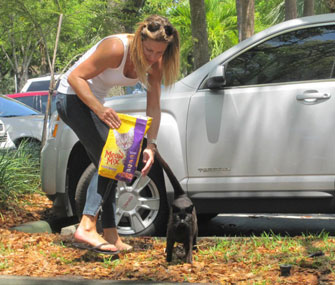 When Dorian Wagner of Deerfield Beach, Fla., began feeding a couple of cats in her office parking lot, she had no idea that five years later, she’d still be taking care of them.

Wagner is one of many people across the United States committed to feeding and monitoring feral cat colonies.

According to the ASPCA, the estimated tens of millions of feral cats in the United States are either born in the wild, or have been abandoned or lost andturned to wild ways to survive.

Many feral cats live in colonies, and proper management of these groups by dedicated human caretakers can keep colony populations down and improve the cats’ quality of life.

But who are these caretakers? From lawyers and monks to students and retirees, they don’t fit just one profile. But what they do have in common is their sense of duty and their compassion for animals.

It Makes a Difference

“I honestly didn’t mean to take them on,” says Wagner, who has two cats of her own. “But cats just seem to find me.”

One day, after a few months of feeding her “parking lot kitties,” Wagner noticed another woman feeding cats in the adjacent parking lot. She struck up a conversation and learned that the woman had been caring for the cats in the office park for 20 years.

Over time, Wagner met two other ladies who also fed small colonies in nearby lots.

The women eventually joined forces, and today they take turns feeding all of the cats in the office park. Wagner no longer works there, so she pulls weekend duty. “It’s about an hour out of my day on Saturdays and Sundays to drive over and feed them,” she says. “But it’s part of my life.”

The women update each other every time they visit the cats. “If a cat is MIA for a few days, we go on a full-out search to make sure the cat’s OK,” Wagner says.

The number of cats in the office park has declined, thanks to the women’s Trap, Neuter and Return (TNR) efforts. They have also found homes for some of the friendlier cats.

Wagner says other employees in the building were interested in the cats. “I’d be in the elevator, and someone I’d never seen before would ask how the cats were doing or tell me where they saw one that day. Everyone knew me as the cat lady.”

Wagner believes her efforts have made a difference for the cats in her care. “I like to think that people are nicer to these cats because they know someone cares about them.”

READ MORE: Cats, The Human - Animal Bond, Social Responsibility, The Things We Do For Love

READ MORE: Cats, The Human - Animal Bond, Social Responsibility, The Things We Do For Love