Home ›
Our Pet Experts ›
Caroline Golon ›
The Things We Do for Love: "We Spent Hours in a Storm Caring for Our Injured Dog"

The Things We Do for Love: "We Spent Hours in a Storm Caring for Our Injured Dog" 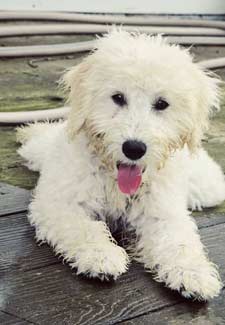 Caroline Golon, the human behind popular humor blog Romeo the Cat, shares the stories of pet owners who have gone the extra mile for their pets in this series, The Things We Do for Love.

Last year, Amanda MacArthur and her fiance, Patrick Hughes, hunkered down for a tropical storm headed toward their Homosassa, Fla., waterfront home. The couple prepared for every scenario, but they never imagined that the emergency they’d be facing would be nursing their injured dog all through the night.

As the storm raged outside, Napa, a then 1-year-old Miniature Goldendoodle, passed the time chewing on a hard toy that was meant to be indestructible. Suddenly, part of the toy, a plastic ring, got stuck around Napa’s lower jaw and wouldn’t come off. The dog cried in pain.

MacArthur and Hughes were frantic. The plastic dug into Napa’s gums and lip. They couldn’t remove the ring from his jaw, and when they tried, Napa cried harder. The couple couldn’t leave for help because high-tide storm waters surrounded their house. Instead, they spent hours on the floor with Napa, trying to help him.

With no power or air conditioning, the temperature rose to sweltering levels, MacArthur recalls. One person held Napa and petted him, trying to keep him calm. The other, using the saw tool on a tiny Swiss Army knife, slowly sawed the toy off Napa’s mouth. “The toy was not meant to be chewed,” MacArthur says, “so the sawing literally took four hours.”

Hours later, the couple was able to remove most of the ring, but part of it was still lodged in the dog’s lower jaw. Napa wasn’t able to close his mouth, and the hard plastic dug into his swollen, bleeding gums. MacArthur believes the dog was in shock from the pain most of the night.