Home ›
Our Pet Experts ›
Caroline Golon ›
The Things We Do for Love: "We're Allergic to Our Seven Cats But We'll Never Give Them Up"

The Things We Do for Love: "We're Allergic to Our Seven Cats But We'll Never Give Them Up" 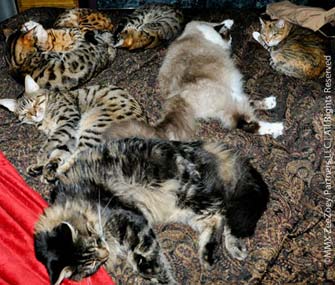 Deb Barnes and her fiancé Dan Powers are both allergic to their seven cats. But instead of giving up their furry family, they’ve found a way to live peacefully with the cats — and the allergies. Barnes already had cats and a dog by the time she was diagnosed with her allergies. “The doctor said, ‘Get rid of the pets!’ and I said, ‘Are you kidding me?’ I was flabbergasted that he’d even suggest it,” she says. So the pets stayed, and Barnes sought ways to deal with the symptoms.

The diagnosis prompted years of daily shots for Barnes. Over time, she says, the effectiveness wore off and she moved on to taking pills. “I had to take one every day or I was a basket case.”

Barnes also became fastidious with her housekeeping to keep the pet hair and dander to a minimum. When she first met Powers and learned he, too, had allergies, she stepped up her cleaning when he was around. “Behind the scenes I was constantly cleaning and vacuuming so he wouldn’t realize how bad his allergies were!” Barnes confesses.

When the couple moved in together, they took extensive measures to create a sniffle- and sneeze-free home.

One important step they took was to put an ionizer in their bedroom. “It works really well for us,” says Barnes.

Each week Barnes cleans the ionizer and the air conditioner filters as well.