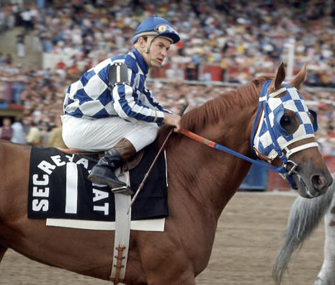 As jockey Mario Gutierrez lines up in the starting gate for his Triple Crown bid on June 9, he’ll have three special — and empathetic — spectators.

Ron Turcotte, Jean Cruguet and Steve Cauthen, three previous winners of the Triple Crown, know how it feels to enter the Belmont Stakes with the whole world watching.

The three champions are the only jockeys alive to have won the Kentucky Derby, Preakness Stakes and Belmont Stakes, which are run in a five-week period. Cauthen was the last winner, with his 1978 sweep. This weekend, Gutierrez will ride I’ll Have Another in an attempt to break the drought and nab the 12th Triple Crown title.

Vetstreet caught up with the trio to hear about their storied experiences in the ultimate race — and their thoughts on this year's accomplished contender.

The "Tremendous Machine" Known as Secretariat

In 1973, Turcotte rode Secretariat to one of the most thrilling victories of all time, setting a world record by blazing through the 1½-mile course in 2:24 flat, at 31 lengths ahead.

Announcer Chick Anderson called out: “Secretariat is alone. He is moving like a tremendous machine!"

“I kept hearing the call, and when he came around the turn, [the announcer] said I was 15 lengths in the front, and then 20 lengths in front," says Turcotte. "My curiosity got the best of me, and I just took a peek at the back. Matter of fact, I turned in the saddle and looked back, and Lucien [Secretariat’s trainer] said, ‘Oh, my God. Ron’s going to fall off.’ But all I could see was the people jumping up and down in the stretch, and I wasn’t worried at all because I hadn’t set my horse down at all . . . I remained confident during the race, and I didn’t think there was a horse in the world who could beat that horse the way he trained.”

Belmont was Secretariat’s home track, which Turcotte believes is the least challenging of the three. “Before I loaded into the gate, I thought our hardest job was behind us,” he notes. “I always thought that the Belmont was the easiest of the races. You're going into unknown territory when you go to the Derby. There’s horses you haven’t even seen, let alone ride against them.”

He credits Lucien Laurin, the trainer, for encouraging an independent mindset. “The trainer gave me a free hand, and always told me to use my best judgment and ride him like I own him,” says Turcotte. “I didn’t feel no pressure. So when I was making a move like the one I made in the Preakness, I said, 'Well, I’m going to ride my own horse. I’m not going to ride the other horses. So I did, and I went on and galloped the race.” 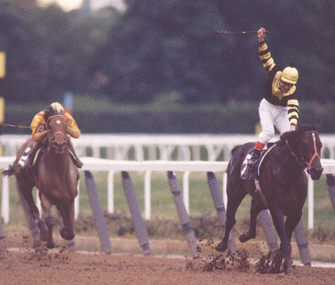 A Gesture That Became a Signature

Cruguet, who claimed the Triple Crown in 1977, was the only jockey to ride an undefeated champion, Seattle Slew. “I was pretty busy, I didn’t have time to think,” Cruguet tells Vetstreet. “But when you know your horse, you know what to do. I was confident about the horse.”

In the last few strides before Belmont’s wire, while closing in on his four-length win, Cruguet stood up in his stirrups and waved his whip high in the air. This unprecedented move wowed the crowds, inspiring The Blood-Horse to report that it was “just the sort of thing to make a trainer's heart leap to his Adam's apple.”

“When I raised my arm, [it was] for all the people who were rooting against me. The French way to say [take that!]” explains Cruguet. “I only did [that] once in my life.” But the surprising gesture has become a classic sign of success — even as trainers pray that the jockeys don’t tumble off before the finish line.