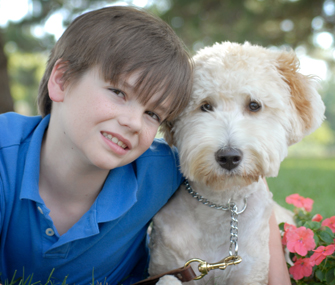 In honor of International Assistance Dog Week, we decided to check in on a special boy whom we first featured last September — an enterprising 7-year-old who wrote a children’s book, The Seizure Dog, in order to raise funds for his own seizure service dog. Evan Moss's efforts ultimately landed him on The Early Show — not to mention an Amazon best-seller list.

Now Evan has something else to be proud of: This summer, after completing a 10-day training session, he brought home his long-awaited pup, a Goldendoodle named Mindy.

A Beauty Treatment and Some Bonding Time

“The training was really impressive, but it was intense,” says Evan’s mom, Lisa. “There was so much to learn! And we also almost didn’t recognize Mindy — they had sent us a photo of her with long, curly hair, but she had been groomed right before we got there. She looked like a different dog!”

The family quickly got over the shock of the pup's freshly shorn appearance, and Evan and Mindy began bonding over the next few days, which Lisa extensively chronicled on Evan's blog.

Of course, the first week at home was the true test.

“Mindy has a new home and a relatively new family, so it’s an adjustment,” says Lisa. “But she’s been enjoying playing with our other dog, Dinky, and whenever Evan leaves the room, Mindy trails closely behind.”

Although Evan still sleeps in his parents’ bed — this allows his parents to quickly administer seizure medication — he'll soon be able to move into his own room, with the vigilant Mindy by his side.

“Evan hasn’t had a big seizure yet [since Mindy has been home], but Mindy has already been alerting us to some smaller seizures that would have gone unnoticed before,” says Lisa.

“Having Mindy is great!” says Evan, summing up his feelings about his new assistance dog.

His mom has to agree: “I think Mindy is going to change our lives in ways we aren’t even aware of yet.”