The Women Behind Swamp Dogs of LA 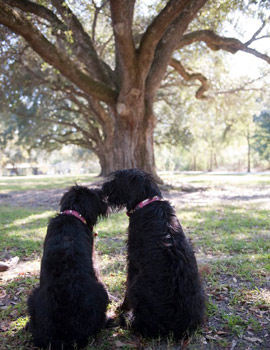 Leslie Sandlin and Barbara Conner have known each other since childhood. “This is a small town,” Sandlin drawls. “Barbara actually lived next door to my mother and father for a while.”

As adults, though, the two women's lives took different paths: Conner abandoned her early career as an X-ray technician to become a motorcycle racer and successful jeweler, combining elegant freshwater, Tahitian and South Sea pearls with rock ’n’ roll-inspired materials like leather and sterling silver medallions. Meanwhile, Sandlin became an entrepreneur of sorts with her hands in everything from recruiting to business development for various companies.

But the two remained in the general vicinity of Lafayette. And when Sandlin needed a gift for her daughter’s 25th birthday in 2009, she made a beeline for Conner’s bijoux collection. It was fate. They ran into each other and, in no time, the jeweler had hired her old friend as her head of marketing. 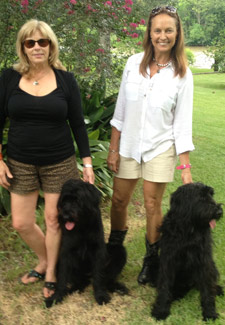 The Dogs Who Inspire

Both women have always loved animals, and Conner, especially, is all about dogs. So perhaps it’s not surprising that one day in 2011, when she and her husband were out riding and spotted some “big old beautiful black dogs” running around, trailed by a couple of puppies, they pulled over to find out more. A man named Cheddar — “Very Louisiana,” Sandlin says with a laugh — was selling the pups, who had been born during spring flooding that claimed the lives of most of their siblings. Conner fell instantly in love and had to take one home. “She already had two Pugs, a Great Dane and a beautiful Shepherd,” Sandlin says, laughing. “Her husband said they had too many already!”

But Conner insisted and brought a girl puppy named Sam home with her. At the same time, Sandlin was down in the dumps, having just lost her own 16-year-old Schnauzer. Conner told her that she absolutely had to go back and adopt the other girl puppy. Sandlin did just that.

That summer, the two women watched Sam and Sissy, the canine sisters, “grow like weeds” together. And it was while watching them play that Sandlin mentioned having a friend in the alligator business. What a cool idea, they thought, to make alligator dog collars, decorated in pearls like Conner’s jewelry.

By the following week, they were meeting with people about production and design.