Home ›
Our Pet Experts ›
Kristen Seymour ›
Think You're Not a Dog Person? This Article Will Change Your Mind

Think You're Not a Dog Person? This Article Will Change Your Mind 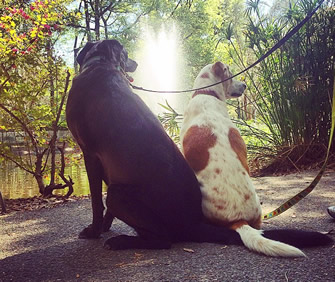 Credit: Kristen Seymour
Rudi and Hollie aren't always the easiest parts of my life, but they're often the best.

Though it's hard for me to wrap my head around the idea, I understand that there are people out there — normal, kind, friendly humans — who aren't dog people. They might not strongly dislike dogs, but they don't see them as desirable members of the family. How do I know? Well, I married one.

My husband was a cat guy when we first met, and though he didn't hate dogs or anything, he had very little interest in sharing a home with one. He thought it sounded like a lot of work and responsibility, and his points were valid. Once we brought our first dog home, our lives certainly changed. Still, I don't think either of us would've traded it for anything. In fact, I'm certain of that, since we're now a two-dog family!

It took a bit of convincing to bring him over to the dog side; he had solid points: Yes, we lost the security deposit on our first apartment, because of the puppy, and, sure, planning travel requires an extra step or two. But my arguments were strong, too. So don't think you're a dog person? Let me tell you why you should be.

(If you're saying, "But I'm a cat person!"— well, it turns out that as different as cats and dogs are, the reasons we love them are awfully similar.)

You know the commercials that show puppies running full speed toward a food bowl, skittering around corners, tripping over their own feet and eventually crashing into the bowl before burying their faces in kibble as they eat with more enthusiasm than most of us could muster for basically anything? That level of hilarity isn't exaggerated... and it really never stops. 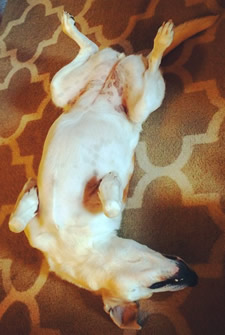 Credit: Kristen Seymour
I like to call this her "Snoopy dance pose." If you could see her face right now, you would not be able to stifle the giggles.

My oldest dog, a Lab mix named Rudi, rarely greets anyone at the door without a toy in her mouth. On the off chance that she forgets to pick up a toy before someone walks in, she'll sprint to grab it, then come back and show it off, because, of course, her new friends want to see her toys, right? And the excitement goes on day and night: Hollie, our Hound mix, often sleeps in what I call the "Snoopy dance pose," which always makes me giggle.

When you add in some of the other silly things dogs do — getting scared by their own toots, letting the small cat reign over them and, of course, the head tilt — it's basically impossible not to laugh. A lot.

Don't feel like getting out of bed or going outside today, even though you know you really should? Most dogs will be more than happy to provide you with some motivation. Some breeds require more exercise than others, but you'd be hard-pressed to find a dog of any breed who doesn't get excited to head out the door with you, even if it's just for a five-minute constitutional after dinner.

Health permitting, many dogs will also be more than happy to accompany you on a run — even the really early morning ones. And let me tell you, you can't ask for a more enthusiastic (or less judgmental) running partner than a dog.