Thousands March in Washington, D.C., to End Discrimination and Abuse Against Pit Bulls 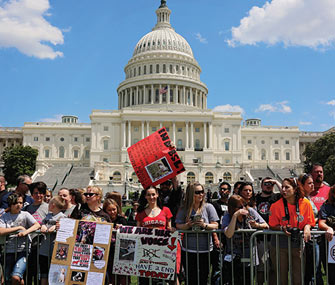 More than 2,000 people from across the United States and Canada gathered at the U.S. Capitol in Washington, D.C., on Saturday, May 3, for the One Million Pibble March, a rally to speak out against Pit Bull discrimination and abuse.

Supporters carrying signs and banners with messages like “Educate Don’t Discriminate,” “Keep Calm and Love Pit Bulls” and “Ban Ignorance, Not Our Dogs” marched from five locations in D.C. and converged at the Capitol to lend their voices to the cause.

Guest speakers included Leah Brewer, owner of Elle, the American Humane Association's American Hero Dog of 2013; Jamie Buehrle, wife of Toronto Blue Jays starting pitcher Mark Buehrle, whose family was forced to live apart because of a Toronto breed ban; Roo Yori, the owner of Hector, one of Michael Vicks’ rehabilitated dogs, and the late Wallace, whom he wrote about in the New York Times best-sellerWallace; and Officer Kelly Steinhorn of the Baltimore Police Department, who rescued her Pit Bull, Pretzel, from a violent and abusive life in the streets.

Noticeably absent from the march were Pit Bulls themselves. Actress and comedian Rebecca Corry, the organizer and creator of the march and founder of Stand Up for Pits, made the controversial decision to not allow participants to bring Pit Bulls for practical, safety and moral reasons.

“Simply put, dogs cannot change laws, the U.S. Capitol is not a dog park and this is not an opportunity to make it one,” she wrote on The Huffington Post. “This is an opportunity for humans to be their voice.”

One Million Pibble March Stands Up for Pit Bulls 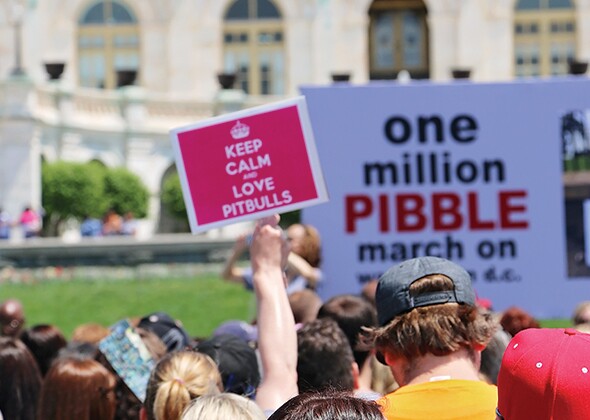 A participant at the One Million Pibble March in Washington, D.C., holds up a sign that says, "Keep Calm and Love Pit Bulls." 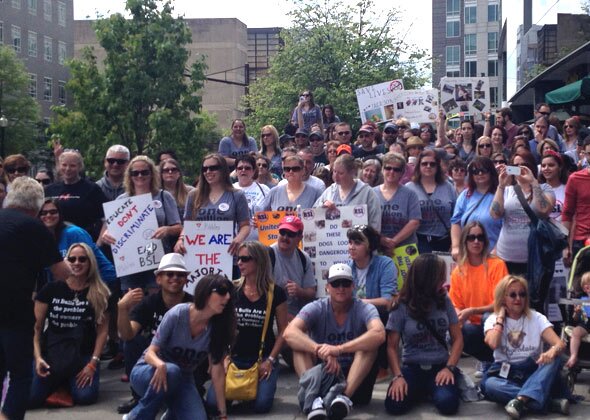 A crowd poses for a photo op before marching to the Capitol. 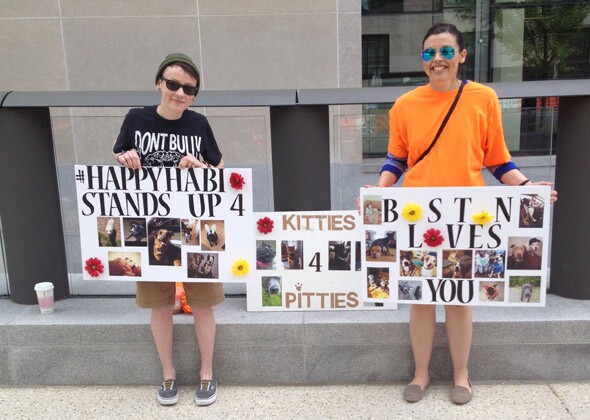 Jax Stewart (left) and Katie Callahan (right) of Boston, Massachusetts, show off their signs before heading off to the rally at the Capitol. Stewart was kicked out of her apartment after she adopted her German Shepherd, Habi. And even though breed-specific legislation was overturned in Boston, Stewart and Callahan say that many major apartment buildings will not rent to people who own certain breeds. 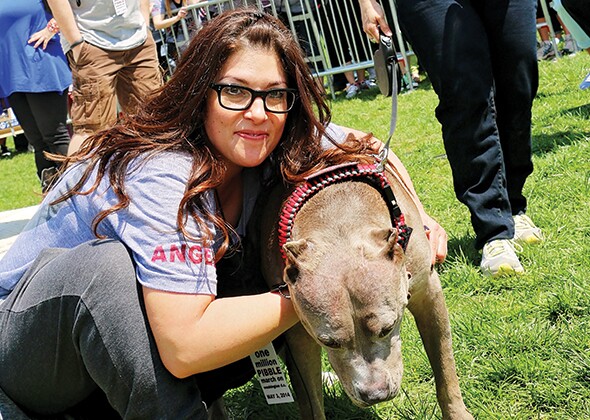 Rebecca Corry hugs her Pit Bull, Angel, who inspired her to create and organize the march. 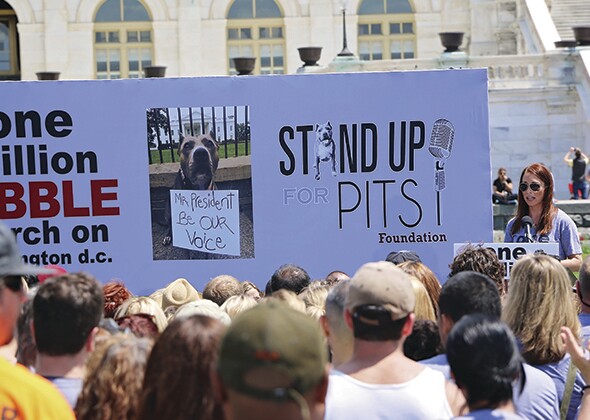 Keynote speaker Jamie Buerhle addresses the crowd. Jamie is the wife of Toronto Blue Jays starting pitcher Mark Buerhle. After the family adopted their American Staffordshire Terrier, Slater, the Florida Marlins traded Mark to the Blue Jays. Toronto's breed laws made it impossible for the family to take Slater with them, so Jamie and her two children — and Slater, who has passed his Canine Good Citizen Test and is on his way to becoming a therapy dog — are currently living apart from her husband, splitting their time between Miami and St. Louis. 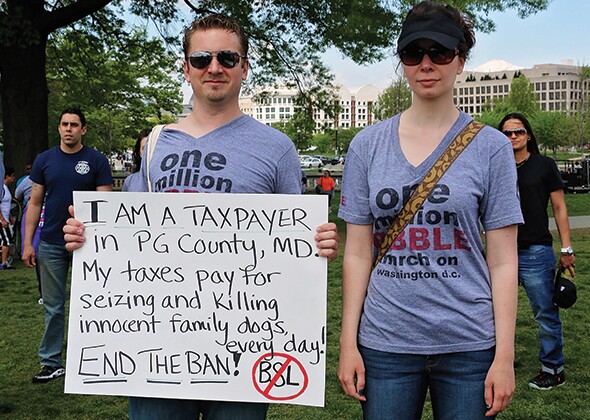 Chris Niebling (left) and Valerie Fenton (right) of Prince George's County, Maryland, came to the rally because they are outraged that their tax dollars are being used to kill innocent family dogs. They say that the county's breed bans are using up too many resources and preventing people from moving into the area. 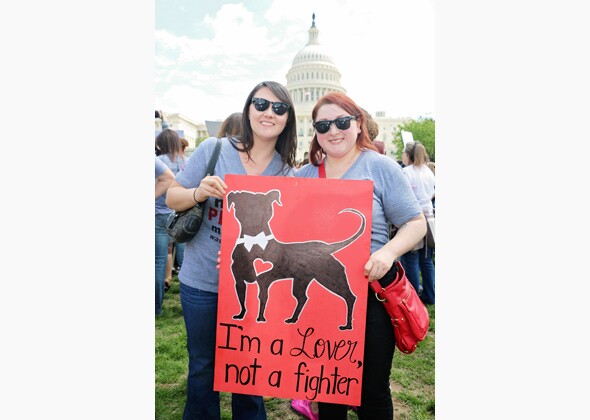 Stephanie Butler (left) and Pat Huizinga (right) of Maryland say that because of breed-specific legislation, it has become too difficult to rent in their state. Huizinga owns a Pit Bull and had trouble finding a place to live. Butler wants to adopt a dog, but her property manager wants to see a photo of the dog before she adopts it, which is discriminatory. 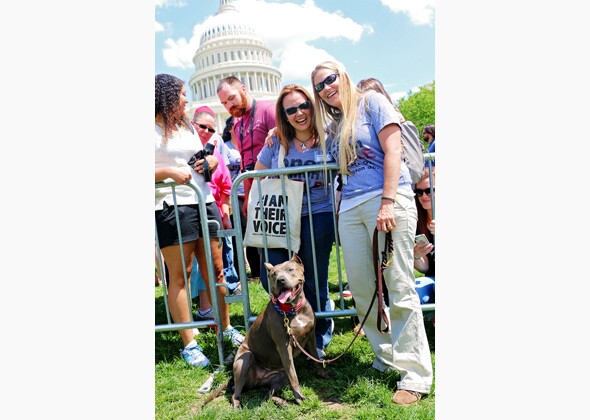 Leah Brewer poses with a rally participant and her Pit Bull, Elle. Elle is a therapy dog who won the American Humane Association's 2013 American Hero Dog Award. Elle has touched countless lives; in particular, she works with kids, helping them learn how to safely pet a dog. 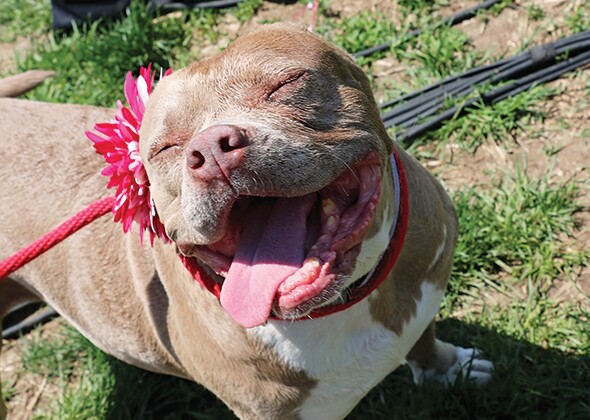 Nana the Pit Bull was used as a breeding dog for nine years before Stephanie Doris adopted her. After years of abuse, you would think the toothless and earless pup wouldn't like humans. But when Doris brought her home, they bonded right away. 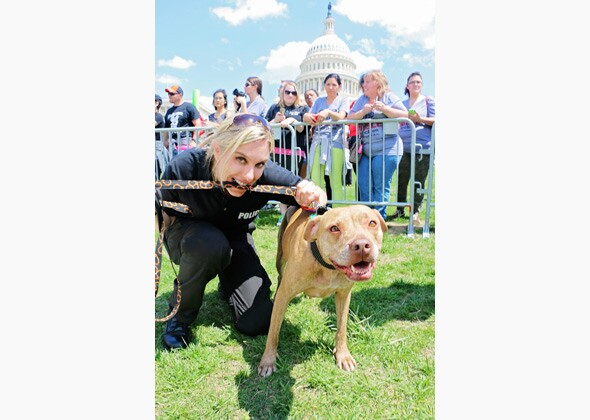 Officer Kelly Steinhorn of the Baltimore Police Department poses with Pretzel, an abused Pit Bull she rescued eight years ago. As a law enforcement agent, Steinhorn has seen horrific animal abuse firsthand. She told the crowd, "One-hundred percent of dog fights are connected to other violent crimes."

The Inspiration Behind the Event

The momentous event wouldn’t have been possible without Corry, who created and organized the march in honor of her rescue Pit Bull, Angel. Angel was horribly abused and was saved from the streets of Los Angeles, where she was used as a breeding and bait dog. Corry adopted Angel from a rescue and says the dog has changed her life.