Home ›
Our Pet Experts ›
Tips for Grooming Your New Puppy

Tips for Grooming Your New Puppy 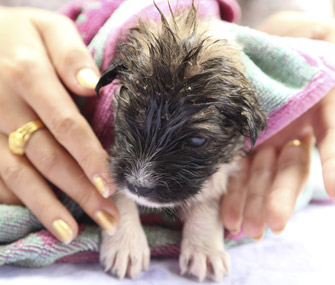 Thinkstock
Start grooming your puppy from an early age to he gets used to being handled by you and other people.

Grooming can not only help your dog look and smell his best, but it can also remove dead skin cells and hair, allow you to inspect his coat and body for any health issues, and bond the two of you together. Though puppies generally don't need much grooming, it's important to start grooming them early, so they get used to being handled by you and other people (veterinarians, professional groomers) in the future.

Using a soft bristle brush, gently stroke his back a few times, giving him a treat every few strokes if he's being good. If he's not, you may need to wait until he's tired, so he won't be wriggling so much or biting at the toy you call a brush. Hold him in your lap while he's drowsy and try a little brushing then.   As he gets better, you may wish to teach him to be brushed on a grooming table or similar structure. Again, use plenty of treats. Be extremely careful that he can't slip, jump or fall off the table. You may wish to start with something low, like a coffee table with a towel or rubber mat placed over it for more secure footing.

While you're grooming, be sure to part his fur to look for signs of parasites or infection. If you see fleas or flea dirt (black specks that turn red when you get them wet), or if you see ticks or anything crawling, ask your veterinarian about appropriate diagnosis and treatment. Puppyhood is a common time for demodectic mange mites to cause thin or patchy hair, especially on the face or limbs. Your veterinarian can diagnose the condition with a skin scraping, and discuss treatment options. Young puppies are also susceptible to getting puppy pyoderma, or little bumps and crusted sores on their lower abdomen that may need to be cleaned daily.

Your puppy is also going to have to get used to being bathed. Do not just take him out in the yard and turn the hose on him! To start, use tap water that's no warmer than the temperature you'd bathe in. If he can fit in a sink, bathe him there.  Remember, you don't have to bathe his entire body right off the bat. Just do a foot or leg the first time and let him earn a lot of treats. It's a lot easier if you have a helper who can steady him and reward him throughout the process.

Be sure that he doesn't get cold afterward — you want him to enjoy the experience. Dry him with a towel and, ideally, get him used to a blow-dryer. Just turn it on near him at first and let him get used to it. Then let the blown air hit his leg or back from a distance, gradually moving closer. Avoid his face for now. If it's cold, he'll quickly learn that the blow-dryer is nice. But give him treats to further convince him!

A pedicure isn't just important to keep your dog's paws looking good — long nails can break and hurt your pup or result in infection. To begin, pick up one of your dog’s paws and gently hold it for a few seconds, touching his toes and nails. Give him a treat. Repeat until you're able to hold his paw for a few minutes. Once your dog gets comfortable with you holding his paw, you can incorporate the clippers — hold them close to a nail and give your dog a treat. Once he's comfortable with that, then you can try trimming a nail or two. This process takes patience — you don't want to rush it and have your dog be scared of getting his nails trimmed.

If you plan on taking your dog to a professional groomer as an adult, call the groomer and ask if your puppy can drop in for a visit (once his vaccinations are up to date). While he's there, have the groomers give him treats, just so he can associate the grooming shop with a fun time. That way when you leave him to be groomed, he won't be as upset about it. And with the good training you've given him about being brushed, groomed and dried, he'll take that in stride as well, and the groomers will enjoy his visits.  Take the time now to make sure that grooming is a pleasure —not a battle.