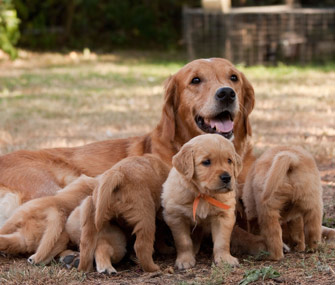 The first day of school can be hard — but human kids don't know just how lucky they are. When it comes to raising and educating their offspring, there are some parents in the animal kingdom who dole out some pretty tough love.

Dogs may be man's best friend, but they're not the kind of parents who want to be buddies with their kids.

When it's time for puppies to stop nursing, mama dog isn't exactly gentle about delivering the message: She gives her pups fair warning, starting with just a look. If that doesn't work, a snarl or a growl follows. And if the pups persist in suckling with their needle-sharp teeth, she'll muzzle-punch them.

"Usually, the first time this happens, you'll see the puppy scream and fall down," says Michelle Yue, a certified professional dog trainer based in Washington, D.C. "It's a really dramatic ordeal."

The ordeal is necessary because the puppies are learning important lessons about dog life, including what kind of look from another canine means "keep away," and which body language they can use to deflect a threat, such as groveling and showing their bellies.

These skills are so important, in fact, that moms also set up lessons outside of weaning. "Some dogs regurgitate food in front of their puppies just so they can attack them when they get close, or they'll carry in a bone and do the same thing," says Yue.

It's the most familiar example of animal tough love: A bird pushes its baby out of the nest, so it can learn to fly.

But it's a myth. They're not pushed — they jump.

Once young birds are big enough to abandon the nest, you'll see them testing their wings. When they're finally ready, "they'll literally just take that plunge," says Jason Martin of the Cornell Lab of Ornithology, who leads a citizen science project called Nest Watch.

The parents provide some care to the newly departed fledglings, but it doesn't last long. Gradually, the relationship shifts, and the adults start to see the growing birds as competition, so they chase them away!