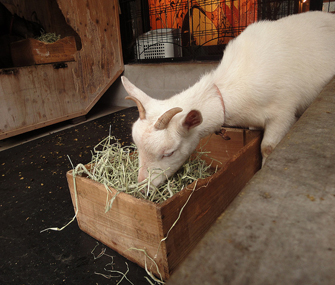 Photo by Linda Lombardi
Sakura, one of two female goats who call the cafe home.

In a big city where people live in small apartments and work long hours, having a pet isn't always possible. So what's an animal lover to do? In Tokyo, some clever cafe owners have come up with an unusual solution to this problem.

Eating With the Animals

You may have heard of Japanese cat cafes, where for an hourly fee a cat lover can have coffee in a room full of felines and, if they deign to approach you, perhaps even pet one. At first, this seemed like the sort of strange thing you'd only see in Japan, but recently they've started to spring up all over Europe: in Vienna, Budapest, Munich and Madrid. The first cat cafe in Paris recently opened and was immediately booked for the whole first month, and one is planned for London as well.

But while the cat cafe craze is starting to spread around the world, back in Tokyo the idea has expanded to other animals. There are now rabbit cafes and one with reptiles,although in these cafes the animals don't wander around like the cats do. Birds are also starting to fly into the picture: Special cafes where you can bring your dog are fairly common in Japan, but much more unusual is the one in Tokyo where falconers can come with their birds of prey.

But perhaps the strangest thing to find in the heart of any city is the cafe I recently visited in an area of Tokyo called Shibuya. Just a five-minute walk from the iconic statue of loyal Akita Hachiko, at the Sakuraoka Cafe you can have your coffee on the patio with two goats.

This might not sound entirely appetizing, but when I sat down at the table next to the goats' pen there was only the slightest scent of barnyard. The two goats are perfectly clean and fluffy, and the owner has reportedly made an effort to ensure a pleasant atmosphere by adjusting the goats' diet and keeping only females. 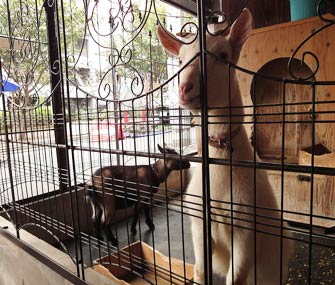 Photo by Linda Lombardi
The two female goats are kept in a clean cage, which patrons can sit next to and have their coffee.

The white goat ran over to me and immediately stuck her head out and started to chew on my pants, but she was distracted when a staff member arrived to clean up the minimal amount of droppings on the floor of the pen and feed the goats some fresh hay. She said that the brown goat is named Chocolat and the white one is Sakura, which means cherry blossom. As the goats started to chow down, she leashed Sakura to one side, explaining that she was a bit of a pest and would eat Chocolat's food if not restrained for feeding time. A book of photographs of the goats walking around Shibuya contains brief bios that confirm this description: Sakura is described as "a bit gluttonous" and "a strong-willed, slightly spoiled princess." According to the book, the two goats originally arrived in May 2010 and take a daily leash walk every day at 3 p.m.