Home ›
Our Pet Experts ›
Linda Lombardi ›
Turkey Facts: What You Don't Know About These Birds

Turkey Facts: What You Don't Know About These Birds 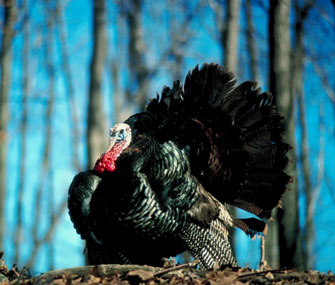 It's that time of year when we all love the turkey — but on our dinner table. As an animal, theturkey gets little respect, supposedly so dumb that it'll drown itself if it looks up while it's raining. That's a myth — and your Thanksgiving dinner's wild relations are probably a lot smarter than you think.

The turkey hasn't always been so maligned. It's not quite true that Benjamin Franklin proposed the turkey as our national bird. But he did compare the turkey favorably to the bird that was chosen.

"For my own part I wish the Bald Eagle had not been chosen the Representative of our Country. He is a Bird of bad moral Character. He does not get his Living honestly," he wrote. "Besides he is a rank coward: The little King Bird not bigger than a Sparrow attacks him boldly and drives him out of the district."

But the turkey, Franklin said, is a "much more respectable Bird... He is besides, though a little vain and silly, a Bird of Courage, and would not hesitate to attack a Grenadier of the British Guards who should presume to invade his Farm Yard with a red Coat on."

The people who spend the most time trying to outsmart turkeys nowadays would likely agree with Franklin.

"I think if you talk to a turkey hunter, he or she would definitely tell you they're not stupid," says Alan Krakauer, Ph.D., of the Department of Evolution and Ecology at the University of California at Davis.

Partly this is because humans aren't the only ones who find turkeys tasty. "They have to deal with a lot of predators, and they're fairly sophisticated about that in many ways," Dr. Krakauer says. "There are predators they know they can fly away from, so they won't waste a lot of energy flying away from a coyote unless it looks really interested in eating them. But they definitely take a golden eagle very seriously and will head for cover."

Turkey communication is also more than just "gobble gobble." "There are over 30 different sounds that they make," Dr. Krakauer explains. Although no one has studied the calls in detail, there are at least a few different categories, including calls announcing predators, contact calls and the calls of males advertising themselves.

The Science of Turkey Family Life

Turkeys have some interesting cooperative behaviors. "The females have what are called crèches," Dr. Krakauer says. "That's where multiple moms join their broods together and have joint child care."

The males also have a communal courtship behavior that's extremely rare in birds: Small groups of male turkeys will display together to the females.

This posed a bit of a scientific puzzle, according to Walt Koenig, Ph.D., of the Cornell University Lab of Ornithology. "It's only the dominant male who gets most of the mating," he says. "What are these subordinate males getting out of it?"