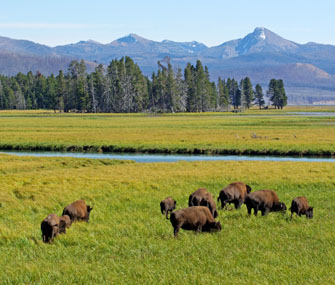 Looking to find — or avoid — grizzly bears in Yellowstone National Park? There's an app for that! Two of them, in fact. A pair of new smartphone applications called Where's a Bear and YNP Wildlife allow park visitors to report and receive real-time wildlife sightings. The Where's a Bear app, from Android developers Blackbonnet, encourages you to maximize your Yellowstone vacation time by taking the guesswork out of finding the best places to see animals. One feature shows the most popular locations for wildlife sightings, while another lets you set up sighting alerts for the species of your choice, like sandhill cranes, bald eagles and, of course, grizzly bears. There's also a page called the Old Faithful Countdown, which displays how much time remains before the famous geyser's next eruption. The app is available for Android phones and costs 99 cents.

A second app, YNP Wildlife, lets you upload images and record latitude and longitude coordinates when you report wildlife sightings. Like the Where's a Bear app, you can set up notifications by choosing from a list of 19 available species. Since cellphone reception is hard to come by in the park, the app stores recent sightings and updates automatically when your phone regains service. YNP Wildlife is a free program that functions on Android, iPhone and iPad platforms. 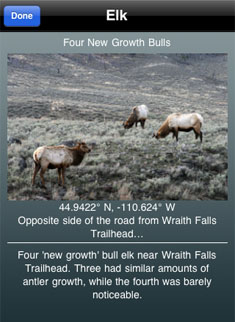 Though the apps promise a maximized Yellowstone experience, some park officials aren't so sure. They are concerned that large crowds of tourists could overwhelm park rangers who are trying to keep visitors a safe distance away from unpredictable animals like grizzly bears.

"If it did take off, it would be a concern," Yellowstone spokesman Dan Hottle told the Associated Press. "It's got other applications, but at its worst core, it would send more people to wildlife jams."

Check out the AP story for more information, and tell us: How do you feel about real-time wildlife sighting apps? Do you think it enhances or undermines the national park experience?