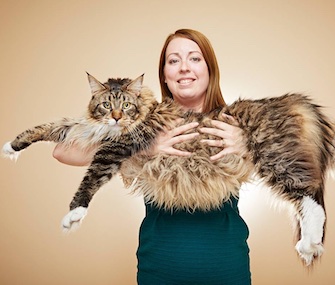 Kelsey Gill knew her Maine Coon would be a big cat. But even when Ludo was just a kitten, Gill noticed he was the same size as Maine Coons who were much older than he was. Now, he’s been given the Guinness World Record title as the longest domestic cat alive. The feline, who lives in the U.K., measures 3 feet, 10.6 inches long. Gill says one of the benefits of having a big cat is that she can always find him. Despite his huge size, Ludo is still 5 centimeters smaller than the longest cat ever, Stewie, a Maine Coon who passed away in 2013. — Read it from Guinness World Records